I decided to go with a slightly unusual team for this tournament at Comic Culture & The Games Store (Lincoln, UK), as I’d already got the alt-art Finn and shield tokens from previous events, and also because I fancied using something different.

Unfortunately, due to other comittments, Jaydee was not able to attend this tournament, so it’ll just be a solo report this time. 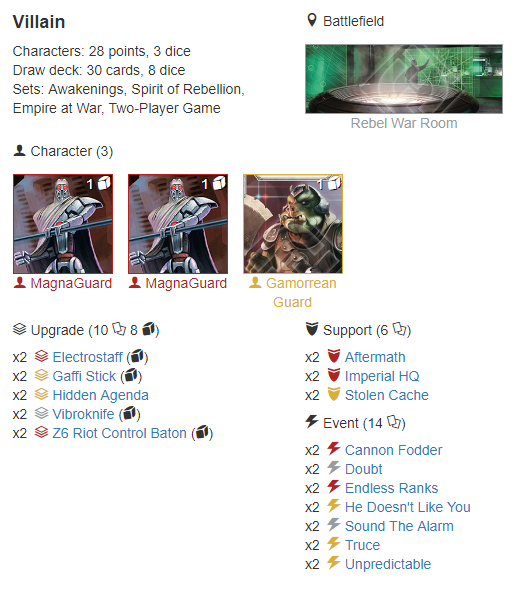 Originally, this team was three MagnaGuards, but something was lacking.  I decided to remove one of the MagnaGuards and added in a Gamorrean Guard.  This gave me access to another redeploy weapon, Gaffi Stick, and resource-generating cards like Stolen Cache and Truce.

The main idea for the team was to be able to withstand the fast aggro decks that are dominating the meta at the moment, such as Kylo2/FN, Cad/Phasma2, or Vader2/Phasma2.  The general strategy would be to guardian as much as possible with the Gamorrean, while putting a few upgrades on the MagnaGuards.  After a few rounds, you should hopefully have enough resources to use Endless Ranks on one of your defeated MagnaGuards.

After playing a couple of games today, I realised that for some reason I had taken The Best Defense out of the deck when changing it from triple MagnaGuard to the current version.  I have no idea why I did this, but it was definitely a mistake!

Round One vs Callum (eSabine/eEzra)

I won the roll for the battlefield, and decided to go with my opponent’s, Starship Graveyard.  Let me tell you now, the two shields were not worth the hassle that the battlefield caused!

Sabine came out swinging, use Smuggling to drop Thermal Detonator into the discard pile, then attached it once she activated.  Repeated Thermal Detonators would be brutal against my three-character team, so I had to take her out fast.  Unfortunately, Sabine managed to get a Second Chance into play just in time, but I managed to down her the following round.

That just left Ezra, who managed to squeeze out a few points of damage, but kept getting beaten down by my two remaining MagnaGuards.  After three Second Chances, Ezra was finally defeated.  WIN

Round Two vs Carl Wn (Vader1/Thrawn)

This was an usual team, and my initial reaction was “only two character dice?!”, but after having my hand demolished every round, I had to get over that reaction.

It took me nearly four rounds before I defeated Vader, and my deck was looking a bit sparse.  Thrawn has a lot of health to chew through, and I managed it a couple of rounds later with only two cards in hand and none in my deck.  WIN

Round Three vs Carl Ws (eVader2/ePhasma2)

This was exactly the sort of team that my guards team was designed to face.  Needless to say, this game was extremely brutal.

Vader and the Gamorrean died first, which left Phasma against a couple of MagnaGuards.  Phasma was sporting some force powers (thanks Sith Holocron!) whilst the MagnaGuards were passing Gaffi Sticks between each other.  I think I used Endless Ranks twice in this game, much to my opponent’s annoyance.  WIN

Round Four vs James (eKylo2/eFN)

This was a very close game, with Kylo and FN dishing out lots of damage very quickly.  Thanks to my good mix of colours (12x red, 12x yellow, 6x grey), Kylo’s ability didn’t manage to hit very often.

I killed FN first, and as usual the Gamorrean died first (he’s such a good guardian!).  That left Kylo (with lots of redeploy weapons) against two MagnaGuards.  On the round where I had just one guard left, it would come down to whether or not I drew a copy of Endless Ranks.  I drew five cards…no Endless Ranks!  LOSS

Round Five vs Kayne (eCad/ePhasma)

Cad/Phasma is going to be a frequent appearance at tournaments for the time being, because it is a very effective aggro deck.  With several ambush blasters (Holdout Blaster, LL-30 Blaster Pistol, and X-8 Night Sniper), you can attach a weapon, activate Cad Bane, then resolve his dice without fear of mitigation.

This game followed the usual pattern of the Gamorrean dying first, but it took me just a little too long to kill Cad.  My opponent was able to kill off both of my MagnaGuards in the same turn, thereby preventing me using Endless Ranks.  LOSS

It was 13-7 in favour of villain teams overall, which isn’t too bad a mix (but seven of the top eight were villains).

Cad/Phasma was the most popular team (not too surprising), and there were a couple of Palpatine teams, both placing high.  Notably absent were Thrawn/Unkar decks.

I had to play against the same person that just beat me in round five!  The usual suspects died first; the Gamorrean and Cad.  This time though, Cad died in a timely manner.

When it came to the two MagnaGuards versus Phasma, I managed to time my Endless Ranks better this game, using them both before striking Phasma down.  WIN

With guardian on the Gamorrean, and an overall decent amount of health (27), I felt like I had a good chance here.  The Gamorrean did a great job for the first few rounds, using his guardian ability to take two or three damage each time, thereby preventing Palpatine’s ability from working on those dice.

Having played against Palpatine a lot in the past, I knew that he could generate a decent amount of shields (particularly with the new addition from Empire at War, Indomitable), so I kept the Vibroknife I had in my opening hand (normally I’d try and mulligan for redeploy weapons).  This proved key, as it also cuts through Force Illusion.

After a few rounds, I had a decent number of upgrades in play, and managed to roll out ten melee damage while the Vibroknife die was in play; just enough damage to kill Palpatine!  WIN

Somehow I was in the final, and facing off against the player that beat me in round four.  Having seen how many redeploy weapons he had last time, I decided to change my initial target and go for Kylo, since he has the better character dice.  My team is tough, so I can handle some of the unmitigated damage FN can dish out with his ability.

Thanks again to my good mix of colours, Kylo’s ability missed more often than it hit.  Kylo and the Gamorrean were the first two to go (poor Gamorrean, he always dies first). 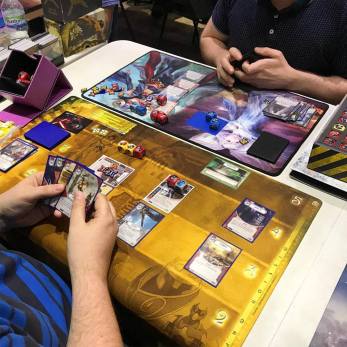 The picture above was the situation shortly after.  As you might be able to see, my MagnaGuard on the left has nine damage counters on it.  I know that you cannot place more damage on a character than they have health, but he was on six damage and took a hit for three, and it’s funny to see how much damage you can pile onto a MagnaGuard before it is defeated (it’s worth noting that you cannot place indirect damage on a MagnaGuard in this situation).  You can probably spot the Cannon Fodder that I’ve got in hand, which I used that round to take a three-damage hit from a Lightsaber onto the soon to be defeated MagnaGuard.

I had Endless Ranks in hand, so next round I brought back the defeated MagnaGuard, and on the round after that clubbed FN to death!  WIN

Going into the tournament, I thought I’d do okay, but I definitely didn’t expect to win.  Is the team I was using going to be top tier?  I don’t think so, but if you regularly face a lot of high-damage aggro teams, you might want to give it a spin.

As stated earlier, I really should have had The Best Defense in the deck, as not only is it a good card and amusing with MagnaGuards, it also gives you a lot more control over when your MagnaGuards die, making your Endless Ranks plays a lot smoother.  I’d probably remove Hidden Agenda for it.

Endless Ranks was a great card in my deck, crucial to my victories.  With cards like Aftermath, Stolen Cache, and Truce, I didn’t have any trouble playing it when I needed to.  Imperial HQ was also an important card, because all of my characters have one or more paid sides.

Quick shout out (can you do those in a written form?) to Ross, who “spent a lot of time” coming up with a name for his Cad/Phasma team; Abra-Cad-Phasma.  Very good!

Anyway, I hope you enjoyed the report.