This week, Tim and James rate the cards from the Ms. Marvel Hero Pack.  Ms. Marvel’s default aspect is Protection, but Hero Packs come with at least one card for every aspect.

This time we are going to be rating the eleven cards from the Ms. Marvel Hero Pack.  If you’d like to rate the cards yourselves to see if our opinions match up, here’s a link to marveldb for a visual reminder of the cards we are rating.

[Tim] (2/5) Nova has a potentially very powerful ability (as it can defeat enemies before they deal damage) but it will require a constant supply of energy resources.  Something like Quincarrier would help with that, but probably the best way to make use of it is to have an energy-heavy deck.  I’ve used Nova with Captain Marvel before to some success, but even then it didn’t seem very good, so I think a 2/5 is a fair rating.

[James] (3/5) Nova has a good ability but is let down by his stats, which often sees him being overlooked outside of the energy resource focused heroes like Captain Marvel. Dealing 2 damage as an interrupt can finish off a lot of minions before they even hit you, and it’s particularly good against Ultron’s drones. Nova is expensive though and for that price point people have come to expect a little more from their allies. 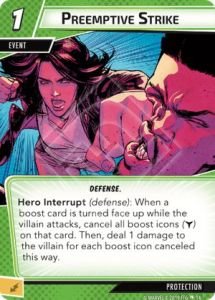 [Tim] (2/5) I’m not a big fan of this card, not least because it single-handedly caused the defence ruling to change.  You have to have it in hand at the right time and hope that the villain flips over an encounter card with a decent number of boost icons on it.  Sure, it will prevent that extra damage as well, but Protection is not short of ways of preventing damage.  On higher difficulties or scenarios with a lot of boost icons in general, this card will be a bit more useful, but I can see it being overlooked more often than not.

[James] (2/5) Preemptive Strike will be a solid play on rare occasions, hitting three boost icons for a six damage swing, but unfortunately it’s just not worth it most of the time. Under the old defence rule it had more value as a means of “defending” in order to trigger cards like Electrostatic Armor and Unflappable, without having to exhaust your hero. However, as things currently stand it’s situationally useful but probably better left in the binder.

[Tim] (3/5) Paying three resources to stun an enemy would be too expensive, so you’re going to want to be able to trigger the 3 damage by paying with a physical resource.  Tackle is an integral part of the stunlock decks that are popular in true solo.  Stun effects become less powerful the more players are involved in the game, but a stun is still going to prevent a decent amount of damage and/or activation effects, so they’re generally worth it.

[James] (3/5) Tackle is just a very poor man’s Heroic Strike, but it did enable any hero to play a stunlock deck. I don’t think it’s too controversial to describe stunlock as being Protection’s best, and maybe only viable, true solo build. Deals abysmal damage for its cost but preventing the villain from attacking always feels good. Rated it as a 3 instead of 4 because of the low damage in combination with Protection having a number of other ways to stun, so it’s possible to run stunlock now without Tackle.

[Tim] (5/5) Probably the best card in the whole aspect, even if it is really boring.  Not much to say about it; it’s going to prevent three damage and deal three damage.  It’s very efficient and pretty much an auto-include in any style of Protection deck.

[James] (5/5) Energy Barrier is a very good card, and currently ranks amongst the reasons to even play Protection to begin with. The damage mitigation it offers can keep you in hero form longer, which helps with threat control by cutting down on the number of flips back to alter-ego. It is also useful in dealing with minions as the damage ping can help set them up to be more efficiently defeated. Energy Barrier goes in every Protection deck I build and I don’t see that changing any time soon.

[Tim] (3/5) Lockjaw is a great filler card for many decks as he can be played from the discard pile.  Ever get those turns where your hand is full or resource cards and/or events that aren’t useful right now?  Lockjaw is the ally for you!  I personally quite like Lockjaw and always try to make space for him in my decks.

[James] (3/5) Lockjaw is a card beloved by many, but it’s a hype train I never personally jumped on board. Having constant access to an ally is certainly nice, however, the premium you’re paying on that versatility results in Lockjaw being slightly over-costed for what you’re actually getting. 2 THW and a block for 4 is not terrible value mind, but it’s also not as impactful as other allies can be either. Lockjaw is by no means bad, it’s just not the first basic ally I reach for when deckbuilding.

[Tim] (4/5) I include Endurance in a lot of decks, as some characters can really benefit from three extra Hit Points, particularly ones with low totals such as Black Widow or Hawkeye.  I’ve also found it useful on high Hit Point characters such as She-Hulk (to help with her Gamma Slam) and Thor (to make sure that he never wastes any healing from Moment of Triumph).  Not every character will want Endurance though, but I’ve found that characters on the extremes of the Hit Points curve will get the most use out of it.

[James] (4/5) Endurance is just boringly good filler. Not many heroes strictly need it, but having the extra health is always nice for those turns where you don’t have any chump blocks to hide behind. 9 health heroes like Hawkeye, who also likes any real defensive cards, find it particularly good. Being able to play it on other heroes makes for some good deck thinning in multiplayer too.

[Tim] (1/5) I don’t like this card for pretty much the same reason that I don’t like Enhanced Awareness; I think you’d just be better off including useful cards with the resource type that you’d prefer.  Even a character like Captain Marvel who needs an energy resource for her ability can probably make-do with just Quincarrier and her hero cards.

[James] (3/5) Enhanced Reflexes can be good in the right deck as it enables you to convert non-energy resources into energy if you need them without compromising the resource composition of your deck, which can be important when it comes to dealing with problematic attachments. It can also be used to set up bigger turns later in the game. Regardless of the intended use it’s important to note that these “resource generators” do not actually generate any resource advantage as you’re simply spending three now for an extra one over three turns later. Energy resources are slightly more useful than mental, so this Enhanced generator has more value than Enhanced Awareness.

[Tim] (2/5) If you don’t have two targets for Melee, then it’s an expensive Haymaker.  I don’t think that many characters other than Ms. Marvel will often use Melee, particularly as it has a mental resource on it which doesn’t synergise with a lot of Aggression cards at the moment.

[James] (2/5) Melee gives Aggression an expensive answer to minion swarm, however, it’s high cost and targeting limitations make it a pretty difficult card to justify including though. The card has slightly more value in multiplayer due to the greater chance of there being multiple minions in play, and is an adequate way of building up those Hall of Heroes tokens as a result. The other interaction of note is Ms. Marvel’s Embiggen, which increases both sources of damage making it better at dealing with the bulkier minions. Relentless Assault is a very tough act to follow, and I think it still does a better job at handling minions.

[Tim] (3/5) Stopping the villain scheming is nearly worth the cost of this card alone.  Just like with Tackle, you’ll be wanting to pay a physical resource to get the 3 damage effect as well.  This card is even better in true solo, where negative status effects on the villain become proportionally more potent.

[James] (4/5) Confused remains the best villain control in the game, and Concussive Blow is the only non-hero specific way of inflicting that status card. That alone is the reason I consider Justice Tackle to be better than the card its based on despite it sharing all of its predecessor’s limitations. Expensive to play with garbage damage, but being able to stop the villain from scheming is just so important in defending against an untimely Advance reveal, or enabling a quick trip back to alter-ego.

[Tim] (2/5) Characters that can ready themselves easily (Quicksilver & Captain America) or a character like Spider-Woman are the only ones that I can see that might play this card.  I’m personally not a fan of Morale Boost at all, but it’s not bad enough to rate it a 1/5 so it gets a 2, but it’s a low 2.

[James] (2/5) Not a huge fan of Morale Boost because not only does it require a hero that can ready itself to get full value from, but it also diverts your Leadership deck away from the most optimised way of playing the aspect (ally swarm). I know that’s going to ruffle some feathers but it’s true. Champions is an easy game to make almost anything work, but it’s still possible to optimise decks and there’s nothing wrong with liking that approach. For heroes like Captain America, or Quicksilver, that have ways of readying themselves the stat boosting side of Leadership opens up another deckbuilding approach though if you fancy a change, but seeing how that approach is very hero dependant, cards like Morale Boost will remain situationally useful at best.

[Tim] (5/5) There are very few characters that cannot benefit from this card (defence-based Protection decks and Spider-Man with his Aunt May card spring to mind).  When building a deck I automatically include one copy of Down Time and then only remove it if I’ve got a good reason.  In my book, that makes this a 5/5.

[James] (3/5) Although not as good, or widespread as Endurance, Down Time is just more boringly good filler that gives your Hero extra survivability for those games that go a little bit longer. Flipping back to alter-ego is usually a risky proposition so an increased REC value can cut down on how many times you have to take that risk. Down Time is not a card I include often but it is one I often consider when finishing off a deck.

So that completes another card review article.  What did you think to how we rated them?