We’re resuming this season by taking on Kang.  He’s a bit different than other villains, having four different versions of his second stage.  He also likes to throw obligation cards around!

Against Kang will be the following Heroes:

Just a reminder of the format, we play the scenario five times with each character that we have drafted and then report our results. 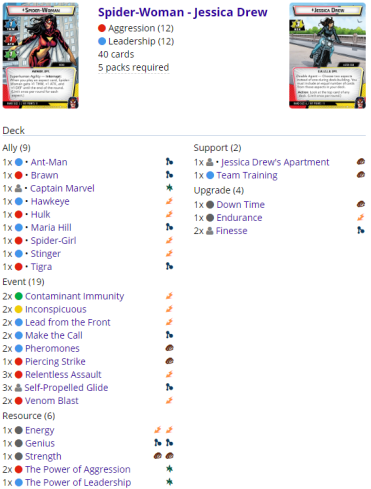 [Tim] I initially went for a build focused around Earth’s Mightiest Heroes and cheap Avengers, but after one practice game with it I instantly discarded that idea and went with a more general build.

Hawkeye (Clint Barton) and Maria Hill are old Leadership allies that almost always seem to make the cut, but they were joined by Ant-Man and Stinger, both cheap new allies.  Aggression has some pretty good allies now as well, so Brawn, Hulk, Spider-Girl, and Tigra all made the list.

For events it would be daft not to include Relentless Assault and Make the Call when you have the chance.  I decided to add two copies of Lead from the Front and one copy of Piercing Strike, as I thought that they could both be useful.

Team Training is another one that’s too good not to play if you’re using allies, as it lets you get one more activation out of all of them.

Things went very well!  I’ll be honest, before this Showdown I hadn’t actually played against Kang, so I didn’t really know what to expect.  Spider-Woman has some excellent cards, and her two copies of Finesse make them easy to play.

I didn’t get much use out of Lead from the Front, so I’d be tempted to remove them for a third copy of Make the Call and one copy of Avengers Assemble!, just so that I had one big flashy card in the deck still.

I think that the Spider-Woman Aggression/Leadership allies deck has some potential, particularly as the Boot Camp card is being released in the Wasp Hero Pack. 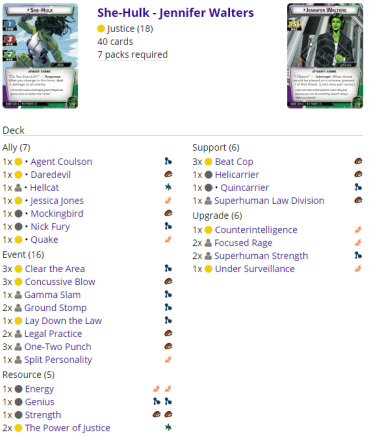 [James] This is a combination I have used a couple of times now, and it has quickly become one of my favourite decks to play. With this particular version though I decided to try doing some things a little differently.

The usual allies are here, Agent Coulson is a good thwarter who can grab Counterintelligence, Jessica Jones is a good attacker who can become a great thwarter if the side schemes start getting out of hand, and Quake is a cheap blocker. Normally I don’t run 4 cost allies if the hero only has a handsize of 4. This is because unless you also draw a double resource card alongside it, or have a cost reducer/resource generator in play, that ally is unplayable. In this version of the deck I abandoned that approach and included Daredevil and Nick Fury in order to bulk out the ally count. I’ll likely return to my initial approach once we get access to a few more basic and Justice allies that cost less than 4, but for now the need to have a critical mass of allies outweighs the potential for dead draws.

The second change I made was to run Concussive Blow over Stealth Strike. She-Hulk likes to spend a fair amount of time in Alter-Ego mode, so inflicting the confused status is super beneficial for her in addition to the usual Advance protection it offers. I also found that between all of the deck’s other threat removal I was not getting full value out of Stealth Strike due to their being no threat to actually remove. I’ve kept Clear the Area and a single copy of Lay Down the Law as my threat removal package, both of which have served me well in the past.

The rest of the deck is pretty much what you’d expect to see. Helicarrier and Quincarrier compliment Focused Rage and help smooth out She-Hulk’s turns, with the later also providing a mental resource for Superhuman Law Division if needed. Beat Cop offers some slow threat removal that can be turned into minion removal in a pinch, and Under Surveillance gives you a little breathing room if things do start escalating threat wise.

Not as strong as the deck has performed in the past but a decent result nonetheless. Scenario ended up being slightly tougher than I expected, but that was primarily down to how long it took to burn through Kang’s impressive health total.

Both my losses ended up being against the same stage II, which in part was due to its retaliate ability leaving me vulnerable to additional attacks caused by encounter cards, and Titania when she showed up with her terrifying attack strength whilst at full health.

The deck performed well for the most part, but I did notice it was difficult at times to get any damage through to the villain. In the past I’ve normally managed my remaining health in such a way that the villain’s stage III is dealt with almost exclusively with a well timed Gamma Slam. This was a lot harder to do with an additional stage to burn through. Something to keep in mind for the future but I think it’s only really a problem I’ll encounter with Kang.

[James] This would be my second time using Spider-Man this Showdown, and after his first performance I’m really looking forward to it. I played this character a decent amount during the Core Set only days, but I’m ashamed to admit I had not given him much thought after Captain America released. This is something I intend to rectify moving forward as he remains a very strong character in my opinion, and one that can put up a good showing with any aspect.

Spider-Man will be paired with Leadership this time in a deck that is sure to astound you with its innovation and originality. I started by adding a lot of allies because they are by far the best card type in the game, and Leadership’s best (and perhaps most broken) cards rely on you having a steady supply of them to abuse. All the usual suspects, such as Hawkeye (Clint Barton), Maria Hill, Mockingbird, Nick Fury and Squirrel Girl, are here for obvious reasons. I also included the Goliath and Get Ready combo to compliment Swinging Web Kick on the damage front.

Ant-Man (Hank Pym) and Stinger are both fairly new additions to Leadership’s ally line up, and are both cards likely to become staples moving forward. Ant-Man offers a versatile state line that isn’t tied to a fixed cost making him easier to play, and Stinger allows Avengers to break the ally limit. I also added U.S. Agent and War Machine because I decided to go heavy on mental resources in an effort to generate resources when playing Black Cat.

Moving on from the allies I included the mandatory Make the Call and Rapid Response in addition to Team Training and The Triskelion for further ally support.

Another 3-2 results, which is good but I was expecting better with this combination. The Game 2 loss was just silly, I flipped to Alter-Ego with the main scheme clear of all threat and no minions in play but drew Advance as my encounter card. Not a lot you can do about that really. Game 5 really came down to the wire though, but I had drawn Shadow of the Past whilst fighting Scarlet-Centurion and those Sweeping Swoops became massive tempo hits. Kang (The Conqueror) survived with a single point of health.

All things considered the deck was fun to play, but I would change U.S. Agent for Hawkeye (Kate Bishop). Had some good use out of War Machine, but you could run Falcon or Vision in that slot instead. 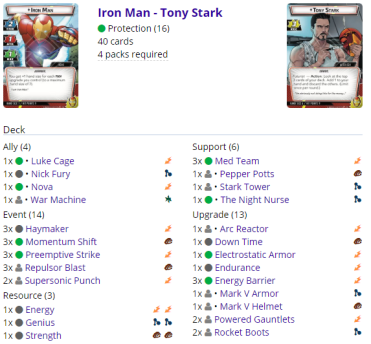 [Tim] Yet again I’m using Iron Man Protection.  What can I say, it works really well!  This deck is based around getting the most out of Repulsor Blast, so it includes as many energy symbols as reasonably possible.  That’s why cards like Haymaker or Preemptive Strike are included, even though they aren’t the best cards in the world.  Some exceptions to the energy symbol rule were Nick Fury, Momentum Shift, The Night Nurse, and Down Time.

Once this deck gets into Hero form it wants to stay there as long as possible and Nick Fury buys you another round.  The default choice for him is to draw 3 cards and this can be useful to help cycle unwanted/unneeded cards in order to get to those juicy Repulsor Blasts!

Momentum Shift and The Night Nurse are also a little bit of healing to go along with the Med Teams.  Down Time is a concession to the fact that sometimes you’ll have to flip back to Alter-Ego and heal up.  Since Tony Stark’s Recover is 3, Down Time seems worthwhile.

Three wins wasn’t too bad.  I’m a bit annoyed about the round one loss in game three, but sometimes you’ll get hit by an Advance.  With Iron Man, unless you’ve got a decent number (I’d say three) of Tech upgrades in play, you can’t really flip to Hero form in the first round, so these things can happen.

Overall I’d say that I was happy with the deck/  The only change that I’d be tempted to make is to swap one Momentum Shift for a Quincarrier.  Having repeated access to a mental resource would be very helpful for activating Rocket Boots.

[Tim] A strong showing overall, but Spider-Woman just clinched it this time.  Spider-Man Leadership finally dropped some games.  Perhaps he’s not nigh-unstoppable after all!

At the end of week 3 I’m four points ahead.  James will be hoping that I slip up against Ultron next time, which is definitely possible as he’s always a tough fight.  Only one more Showdown to go this season, we hope you join us again for the finale.