Fantasy Flight Games have released yet another preview article, this time featuring Drax.  Tim and James decided to give their initial thoughts on the cards shown.

[Tim] With how his Vengeance mechanic works, Drax is going to love the Protection aspect, so it’s just as well that’s his default one.

With a Thwart of one, he’s not going to be doing much thwarting, so it’s his other two stats that you’re going to focus on.  His Attack value starts low but can go as high as four, but to get there you’re going to have to be attacked by the villain three times.  This means that you’re not going to want to stun the villain very often, and probably also want to include cards that provoke the villain to attack during the hero phase (cards like Bait and Switch or Toe to Toe).

Getting attacked by the villain also means that you have to do something about the incoming damage.  All Drax decks will probably want to include Endurance to increase their Hit Points.  If using the Protection aspect, you have a wide variety of options available; other aspects will have to facetank the damage.  You could defend of course, but unless you have ways to ready your character you’ll be exhausted for the hero phase and will be unable to use your enhanced Attack value that you went to the trouble of increasing.  Tough is a good way to get around all the damage, but outside of the Protection aspect your only choice is Invulnerability, and no one wants to have to play that card.

Drax’s alter-ego is more than likely going to provide a decent-sized heal, along with his decent Recover of 4 means that he’s going to be back into the action quickly.  However, you lose the Vengeance tokens that you worked to build up.

What this all means is in my opinion Drax will be a lot of fun and also effective when using the Protection aspect, but he’s probably going to be quite bad when using other aspects.  His Hand Size of 4 will be mitigated in Protection as he’ll be able to stay in Hero form with 3 Vengeance counters for probably most of the game, so he’ll draw a card every time he’s attacked by the villain.  In other aspects, he’ll have to flip back to alter-ego to heal.

Not every Hero has to be good with every aspect.  I think Drax will be good in Protection and next to useless in others.  I hope I’m wrong though!

[James] My first impressions of Drax are not positive. His ability to hit 4 ATK might seem strong on paper, but it’s not worth being stuck with a base 1 THW and, more importantly, a hero hand size of 4. What’s worse is you lose any ATK bonus you build up by flipping back to alter-ego, which you will likely have to do after 2-3 villain attacks. Overall I think he serves as another prime example of how much the designers overvalue a high attack score.

His alter-ego side is basically blank turn 1 (meh), but the healing the forced response provides at least insures you can get off one more attack before you have to flip later in the game. Even with 14 HP and the Protection aspect I expect he will still have to flip often, which is going to be a significant tempo hit. 4 REC is nice, but you shouldn’t need it most of the time.

I’m sure Drax already has his defenders and fans in the community, and given the nature of Marvel Champions he can likely still do well against most scenarios. With what we have seen of the other Guardian’s though I feel that Drax is a massive step backwards.

[Tim] This does a lot for a cost of zero.  Readying Drax means that he could have defended in the preceding villain phase, drawing a card replaces this one, then getting attacked by the villain helps you generate Vengeance counters.  This card is going to be excellent for Drax and I think that you’ll always be happy to see it.  Hopefully he has three or more copies of it!

[James] Helps pump Drax’s ATK faster by forcing another villain attack. Hero ready effect are always nice, especially when they also draw you a card to replace themselves, but the optimal time to play this (max health) is also likely to be when Drax’s abilities are at their worst. Could come in handy in mitigating the effects of being stunned, but eating another villain attack just to clear stun and still be able to attack might be too steep a price to pay. 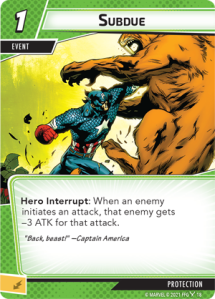 [Tim] Personally, I’m not a big fan of playing cards during the villain phase as it means that I have less cards to use during my next hero phase, but I understand that the end result is the same.  I guess it’s a bit like how some people find the end of Marvel Champions games a bit of an anti-climax, as during the final hero phase you just work out if you have enough damage to defeat the villain and then call it a day.  You actually won the game by surviving the villain phase, but that’s not how a lot of people see it.

Back on track to actually talking about the card, it’s fine.  I like that you can use it when the villain is attacking other players, as it means that you can protect the group without having to defend the attack or while exhausted.  I think that this card will see more play in multiplayer games than true solo.

[James] Subdue seems like a good card for the defence/multiplayer support builds. Lacks the defence trait so can be played when other players are attacked, which makes it one of the more versatile damage mitigation cards the aspect has. Has less appeal in true solo, but I could see running it as your sole damage mitigation in a defenceless build. 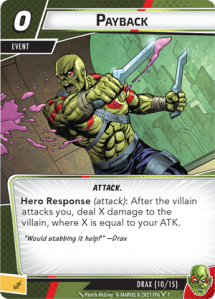 [Tim] Since it looks like Drax is the kind of character that will actually use Counter-Punch, I think he’s going to like this as well.  Ultimately, zero cost to do potentially four damage is a good trade, and unlike Counter-Punch you don’t even have to defend against the attack.  I think when combined with these other kinds of retaliation cards, this is going to be good.

[James] Drax gets his very own, slightly better, version of Counter-Punch. That’s unfortunate as Counter-Punch is likely going to be one of his many reprints. I like that Payback does not require Drax to defend at least, and paying one card for 3-4 damage is pretty good value.

[Tim] As far as threat removal hero cards go, in the context of Drax’s character this will be very handy, as it’ll most likely remove four threat for one resource.  Definitely better than Spider-Man’s Spider-Tracer and Captain Marvel’s Crisis Interdiction.

[James] Intimidation is a card I like, and goes a long way in allaying some of my fears for Drax’s solo experience. Would have obviously preferred three copies but two is still workable. Even with two vengeance counters Intimidation effectively becomes better than For Justice! which is a good spot for any thwart event to be in.

[Tim] You’re almost never going to pay full price for this card, and if Drax is at peak vengeance mode then it’ll cost nothing.  An extra 5 Attack, overkill, and piercing is simply amazing.  Other than the rubbish name, I like this card a lot!

[James] Despite the terrible art Knife Leap is another card I’m eager to try out. Will give Drax some excellent burst damage right before he has to flip and heal, and even gets around guard and tough to an extent. It’s also going to enable some pretty big finishes, which might help people overlook the consistency issues Drax is likely going to have.

With this card in mind I can understand why Drax’s vengeance counters reset, as having it always on as soon as you take that third villain attack might be a little too much. I still don’t think it’s enough to justify his other limitations though.

[Tim] Gambling that you’ll have at least one point of Attack remaining seems way too risky on a character with less than 3 Attack.  I could see it being useful as a way for 3 Attack heroes to get rid of a Tough status or the last Hit Point on a villain stage, but I think this is going to be binder fodder for everyone else.

EDIT: Facebook user Brian P quite rightly points out that if you use this to remove a Tough status you wouldn’t ready because all of the damage was prevented.  Thanks for catching that, Brian!

[James] I can see the appeal of Leading Blow but feel it is going to be quite polarising. In the right build it’s going to be a cheaper One-Two Punch, but probably wont be worth it unless you have an attack value of 3-4. Very niche card that I’m sceptical of, but curious to see how it pans out. Negative impressions aside I absolutely love that artwork.

[Tim] Three is a lot to spend on an event, so it needs to be worth it.  4 damage is below the curve, but gaining a Tough status if you defeat the targeted enemy seems worth it.  The Protection aspect can always do with some more ways to deal damage, so I think this will find a place in a lot of decks.

[James] Protection Stealth Strike seems good, offering minion control and damage mitigation in one package. I can see it becoming the complimentary attack card of choice for the aspect. It will likely have the same problems that the card it’s based on has in solo play (requiring a minion to be most effective) but it will be easier to get full value from. Made no secrets about my feelings on Protection in the past but I’m looking forward to trying this card out. 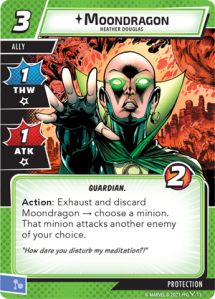 [Tim] Absolutely abysmal stats for a 3 cost ally, but does her ability make up for it?  Most of the time it’s going to be three damage maximum, but it could be funny to use it on minions with Villainous (such as Kang Master of Time) or someone’s nemesis minion (Black Widow’s Taskmaster could be quite a beatstick).  However, it’s another expensive-for-what-it-is Protection ally competing for one of your three ally slots.  I’m not optimistic that Moondragon will be useful outside of a few select scenarios (getting roided-up minions in the Zola scenario to smash each other could be fun).

[James] Moondragon seems really bad. 3 cost for a 1/1/2 is already not great value, but she also requires a discard to use her ability so you’re losing out on the chump block too. There’s probably some niche cases where forcing one of the bigger minions to attack the villain, or a smaller minion, might be worth considering but my first impressions/knee jerk reaction is that this card will be binder fodder.

So that concludes another Spoiler Talk article.  How do our thoughts align with yours?