In our final article reviewing Core Set cards, Tim and James rate all of the basic cards.  They may not be the most exciting cards printed, but everyone can use them!

This time we are going to be rating the eleven Basic cards from the Core Set.  If you’d like to rate the cards yourselves to see if our opinions match up, here’s a link to marveldb for a visual reminder of the cards we are rating. 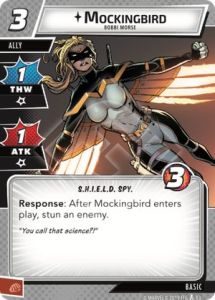 [Tim] (3/5) Her stats are lower than what you’d expect for a 3-cost ally, but the stun she provides more than makes up for it.  Mockingbird is practically an auto-include for true solo decks, but her usefulness decreases the more players are involved.

[James] (4/5) Mockingbird is a fantastic ally that just a couple of months ago I would have rated as an auto-include in every deck. The Wasp pack brought a couple of new basic allies to the game that have changed that though, but Mockingbird remains a strong inclusion regardless. Affectionately nicknamed Blockingbird by the community because of her ability to absorb two villain attacks (stun + chump), she has been a staple since launch and will likely remain one for the game’s entire life.

[Tim] (4/5) Nick Fury is a versatile ally and can help you dig yourself out of a hole.  Most of the time you are simply going to draw 3 cards with his enter play ability, but dealing 4 damage or removing 2 threat can also be useful when times are hard.  He will then attack or thwart for two followed by blocking an attack.  Great ally, and the only reason that I haven’t given him a 5/5 is because sometimes it’s difficult to afford a 4-cost card (even if he does potentially give a partial refund).

[James] (4/5) Nick Fury is another great ally that has recently seen its position of auto-include challenged. Although expensive he has a couple of good enters play effects to choose from (and a bad one). Despite how strong the “draw 3” option can be I think people overlook the damage dealing potential he can bring. It may not be fantastic value, but it does offer some much needed burst damage to decks that might otherwise be lacking it (Justice and Protection spring to mind), and can close out a game in solo quite easily. With both his basic abilities being useable alongside the chump block he provides, Nick Fury is another staple I expect to see in decks for a long time to come. 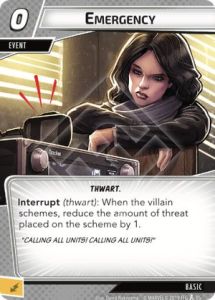 [Tim] (1/5) Back in the Core Set era I tried this card in a few decks (mostly because it has an energy resource) and I found it lacklustre even then.  If it interacted with Ms. Marvel’s Shrink upgrade she’d probably use Emergency, but it doesn’t so that’s that.  Hide this card and forget about it.

[James] (1/5) Emergency is a bad card that just does not do enough to justify ever including it. Preventing another point or two of threat might have given it niche appeal, but even then it would have already fallen out of favour. The limitation of “villain scheming” also holds it back, as without it Emergency might have made good Ultron tech to keep Assault on Norad from triggering (not that Ultron needs even more answers).

[Tim] (2/5) I think that the only thing stopping this card being a 1/5 (and probably the sole use for it) is that you can use it to heal allies.  You’ll likely see this played in a few Leadership decks that focus around more expensive allies and attachments so that they can keep them in play for longer, but as Leadership gets more heal effects printed (like Inspiring Presence and United We Stand), I think that you’ll see this played less and less.

[James] (2/5) First Aid is very niche, but can be good in the right deck. Healing allows you to stay in hero form, which in turns prevents the villain from scheming. It can also keep your allies around, which can be relevant if you’re playing one with a good effect (Daredevil), with a good stateline (Sentry), or one that you’ve just invested loads into with ally upgrades (Ronin). First Aid can be a good card to include in multiplayer as well in order to support your team mates. Overall an okay card that simply struggles to consistently find space in most decks. 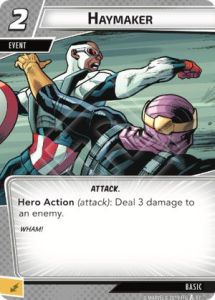 [Tim] (2/5) This event is a solid 2/5 in my opinion.  Some character and aspect combos are always going to need access to an additional source of damage, and Haymaker will be there to lend aid, particularly if they need access to energy resources.  Haymaker isn’t a great card or even a good card, it’s an okay card, and that’s okay.

[James] (2/5) Haymaker is a card I often see maligned by the community and I’m not convinced it is entirely deserved. Sure it’s pretty inefficient, but it can help fill a niche in your deck if you are desperate for an additional attack event to help deal with minions. Most aspects can do this without Haymaker now though so it’s not a card I consider often, but I certainly would not dismiss a deck simply for including it either. 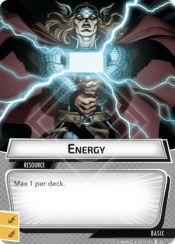 [Tim] (5/5) There’s not much to say about these three cards other than put them in your decks!  Even in decks that want to focus on a single resource type, these are still worth including.  I’d even include them in a Black Panther deck (who has three copies of Vibranium) and just skip out on The Power ofs.  Even if they diminish the effectiveness of a Repulsor Blast now and then, they probably helped Tony Stark build his armour to be in a position to Repulsor Blast.

[James] (5/5) Really not a lot to say about these cards. The extra resource they generate obviously helps smooth out your turns, and they can be pretty essential for getting rid of annoying attachments. The only hero that might even consider not including them is Black Panther because of his Vibranium, but even then it’s probably better to drop The Power of and simply run six double resource cards. 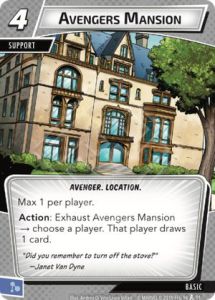 [Tim] (3/5) I haven’t included Avengers Mansion in a true solo deck of mine for absolutely ages.  I’ve seen a few people posting recently about full basic decks for the mystic characters, including two copies of The Power in All of Us to help pay for cards like this, so that might be a circumstance where I would include it.  However, if you’re not making a meme deck (I can’t talk, I made a basic Doctor Strange deck a while back), then sinking four resources into this card is probably not worth it.

But in multiplayer I always include Avengers Mansion, and I honestly think that everyone should do so.  This is because players can request actions, and you can help your team-mates by giving them a card here and there (and they can do the same for you).  Avengers Mansion stimulates table talk, helps make turns more efficient, and gives you a good feeling when you help your friends.

[James] (3/5) Avengers Mansion is a card I’ve cooled on a lot since the Core Set only days, and now the card pool has expanded I almost never play it in my decks any more. It can be a pretty harsh tempo hit at first, often being the only thing you can do the turn it is played, and takes a while to pay for itself. Once set up the advantage of seeing an extra card each turn is obvious, and you can even support another payer with it if you feel happy with what you have in hand, but regardless of the player count it no longer feels like the auto-include it used to be.

[James] (4/5) Helicarrier might not make it into every deck I build these days but it remains a good economy card that I at least always seriously consider. Although not as versatile as drawing an extra card, or generating a wild resource with Quincarrier, it’s still very helpful in smoothing out and making your turns more efficient. Helicarrier is better than Avengers Mansion in solo for most heroes because it’s easier to use the turn you play it too.

[Tim] (1/5) I’ll be perfectly honest here, I haven’t tested this card with Quicksilver yet.  I’ve seen a lot of people posting about great combos using his Friction Resistance upgrade (a card that is quite frankly, bonkers) but my instincts tell me this is straying into Magical Christmas Land a bit too much.

I’ll get around to playing with Quicksilver, but to me Tenacity seems like a poor redundancy for Always Be Running and Earth’s Mightiest Heroes.  If it does end up blowing my mind with how good it is in his deck, I’ll bump this rating to a 2/5 and not any higher, because literally every other character in the game at the moment couldn’t care less about Tenacity.

[James] (1/5) Not only is Tenacity an awful card, it’s a strong contender for worst card in the game. It’s seriously over-costed and I get the impression the designers were trying to avoid the mistake that was made with the card Tenacity was based on (LOTR’s Unexpected Courage), but they over compensated far too much. Readying your hero is rarely worth an effective cost of four resources even if you can spread it out over two turns. Tenacity should have cost one less, and had one of the other two limitations (discard or paying a physical resource to use) removed.

Just to address the elephant in the room before I get screamed at in the comments. Yes, Friction Resistance exists but Tenacity being slightly more playable in one out of seventeen heroes does not change my opinion. Especially as in at least two aspects Quicksilver can easily run Earth’s Mightiest Heroes as an additional, and much better, ready effect instead.

Lots of agreement on ratings this time!  Tim and James do their writeups independently of one another without any discussion, so it’s interesting to see when some of their comments line up nearly identically (they both gave Tenacity a good tanning in this article!).

Anyway, let us know what you thought in the comments section.  Next week we’ll be rating the aspect and basic cards from the Captain America hero pack.