This time we are going to be rating the eight Justice cards from the Core Set.  If you’d like to rate the cards yourselves to see if our opinions match up, here’s a link to marveldb for a visual reminder of the cards we are rating. 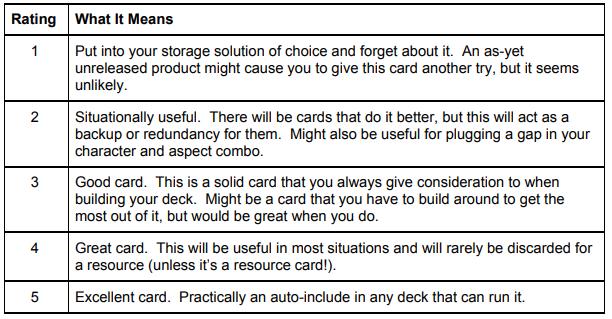 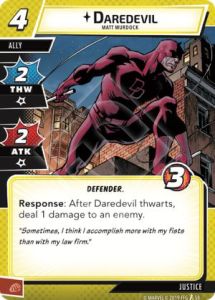 [Tim] (2/5) I think that Daredevil is just a little bit too expensive for what he does.  His stats are okay and his ability can be useful, but to me he doesn’t feel as impactful as a four-cost ally should be.  I’ve used him before and he has been useful in scenarios like Ultron, where his response after thwarting can ping off Ultron drones, but I think that the main reason that Daredevil sees much play is due to the scarcity of Justice allies.  I think that as time goes on he will fade into obscurity.  Let’s hope for a cool hero version at some point!

[James] (3/5) Daredevil has fallen out of favour recently but he’s an ally I still really like. His ability places him in the category of allies I never want to chump block with, but of course that option is always there. This ability to ping an enemy for a point of damage when he thwarts is very useful for removing tough status cards without losing a hero activation or strong attack to do so, or setting up one of the game’s stronger minions to be finished off more efficiently. As much as I enjoyed using him in Champions’ first year he is sadly starting to be overshadowed by the new 2-3 cost allies Justice now has access to. He remains an ally I always consider when building Justice though. 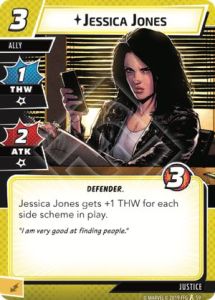 [Tim] (4/5) I might get some flak for giving Jessica Jones such a high rating, but I think she deserves it.  Okay, her stats are textbook average, but her ability to increase her Thwart value is going to occur quite often.  She’s also good for trying to claw your way back into a game if the side schemes have been piling up (i.e. Red Skull), as she can often clear a side scheme on her own.  I think that for three resources she is exactly what a lot of Justice decks need.

[James] (3/5) Jessica Jones has pretty average states for an ally. 2 ATK, 1 THW and 3 health is nothing to write home about but it’s not terrible either. She gives Justice an ally that you don’t mind attacking with, which is pretty relevant when you consider how the aspect struggles to do much of anything besides removing threat. Her ability to increase her thwart value by 1 for each side scheme in play is handy for when things start to snowball out of control. Being able to nuke a side scheme, or just remove a load of threat of the main scheme, can provide some much needed breathing room. This is pretty situational though so you’re more likely to just be attacking twice then tossing her under the proverbial bus. 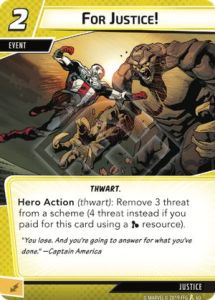 [Tim] (4/5) Justice has been getting a lot of good threat removal cards lately, but I still think that For Justice! is still a great card as long as you can pay for it using a mental resource.  This shouldn’t be too difficult, as The Power of Justice neatly does it in one card, and Sense of Justice was just released in the Quicksilver pack.  What I think is going to happen going forwards is that Justice decks will include a mix of the various threat removal cards, as they are all good in their own circumstances, and I think For Justice! still has a place amongst them.

[James] (4/5) For Justice! is a fantastic card, and it’s the one that all other thwart cards are compared to. Although it’s no longer the true solo auto-include it used to be, certain heroes are still going to prefer this one over the alternatives. It most likely remains the go-to for multiplayer games though due to the higher amounts of threat they entail. 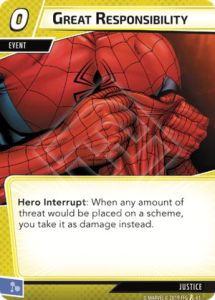 [Tim] (2/5) This card is nearly totally useless in true solo, but has a place in certain multiplayer decks.  The kind of deck that would want to run it would likely be a hero that has a good amount of Hit Points, as they can use this card to cover for their team-mates going back to alter-ego.  She-Hulk in particular might like it because it interacts well with Gamma Slam.  Overall though, Justice has a lot of good threat removal cards and I can definitely see this one being overlooked most of the time.

[James] (2/5) Great Responsibility is a fun card to use in certain situations, but the hyper-niche nature of it really holds it back. Negating the ever annoying Advance, neutralising Assault on NORAD’s forced response, or even just covering for another player that had to flip back to alter-ego to recover are all very potent uses of this card. Sadly those situations don’t come up often enough to justify slotting this card into your deck, especially now that the card pool is expanding. 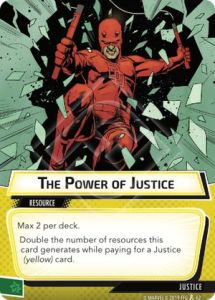 [Tim] (4/5) As with all of the ‘Power of X’ cards, how useful it will be depends on the number of the relevant 2+ cost cards you are running.  A lot of the newer Justice events are only one-cost, but the big hitters like Concussive Blow and Stealth Strike cost three, as well as all current Justice allies being 2+, so I think it likely that The Power of Justice will still be a near auto-include for most Justice decks.

[James] (3/5) The Power of cards still feel like auto-includes to me for most Hero/Aspect combinations but I could not justify rating it higher because of how much consideration they require when building your deck. Everyone has a different minimum amount of 2+ costed cards they like to include but the average I tend to see most is 8-10. There’s a growing number of good 0-1 cost cards though so the days of Power of being auto-include are most likely limited.

Justice in fact highlights why I’ve rated Power of at 3, over Tim’s probably more accurate 4, because of cards like Clear The Area and Multitasking. The aspect can now run a very low cost curve of its own cards whilst taking The Power in All of Us to pay for basic allies and supports. 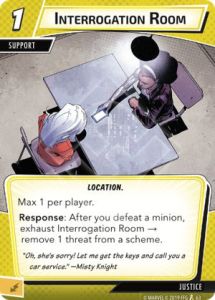 [Tim] (3/5) I like this card.  In true solo I think you should always include a copy and in multiplayer you should still consider it because there will almost always be a minion that you could finish off.  Now don’t get me wrong, when you draw Caught Off-Guard, Interrogation Room will be on the short list of cards that you will consider discarding, but that doesn’t mean it isn’t still useful.  It’s a cheap, low-impact card, that I still regularly play in the majority of my Justice decks.

[James] (3/5) Interrogation Room is another core set Justice card that has sadly, and unfairly, fallen out of favour. This is in part due to the impending change to the You rule, which means you can no longer trigger it if you defeat a minion with an ally, and also due to falling into the shadow of Marvel Champion’s most overhyped card. All that aside I still really like using Interrogation room and think it’s a good source of additional threat control. It shines in the minion heavy scenarios whilst still being useful in most of the others, and it can help thin your deck a little without being overly expensive to play. 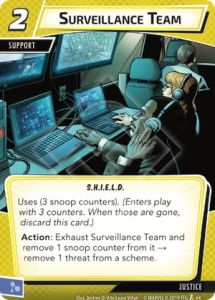 [Tim] (1/5) I don’t like this card at all, and even in the Core Set-only days I didn’t think much to it.  I honestly can’t remember the last time that I included it in a deck and I can’t see that changing any time soon.  The easy comparison is to Beat Cop; for one resource more you can get the same effect but not have to discard it after three uses, AND have a minion-removal option.  Obviously, one more cost either way makes a massive difference to the playability of a card (if Surveillance Team was one-cost, you might use it), but I think at two-cost Surveillance Team is not worth playing.

[James] (1/5) Surveillance Team feels slow and overcosted for what you’re getting. Much like Tac Team it lacks the immediate burst effect of an event, and the versatility of an ally. The ability to remove threat whilst in alter-ego is nice, but given the card’s limitations that’s just not enough to justify including it. Another card that’s just better left in your storage solution.

As a side note, I think if Surveillance and Tac Team had swapped places I would have rated them both as 2s. They would still have all the same limitations they have now of course, but they would at least have been useable to fill gaps in their respective aspects (threat control in Aggression, damage dealing in Justice), especially during the game’s earlier days. 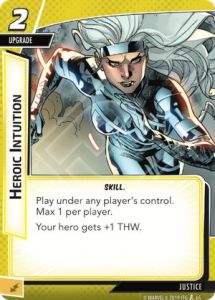 [Tim] (2/5) How many copies of this card do we have now?  Despite that, I’m still not inclined to include it in many of my decks.  I think that like with Combat Training, the amount of benefit you will get from playing it greatly depends on if your character has the ability to ready themselves.  I could see this card being useful if it helps your character hit a particular threat removal threshold (e.g. side schemes enter play with 3 threat on them, and Heroic Intuition would put your character to 3 Thwart).

[James] (3/5) The Justice basic ability boosting upgrade is even more situational than Aggression’s Combat Training. Heroic Intuition can get some value from heroes with ready effects, and there is definitely merit in boosting a base 2-3 thwart to 3-4 in order to make removing certain side schemes with a single hero activation easier. The problem, at least for me, is that Justice’s whole identity at the moment is built around removing threat. You shouldn’t need to boost and use your hero activations to do that when all your allies, events and supports are pretty much geared towards controlling threat. Heroic Intuition gets a 3 purely because the above approach has some merit in multiplayer, and can be useful in true solo too. I find myself very reluctant to call it a good card though, and expect this to be the rating I change my mind on first.

We were unanimous on the best and worst Justice cards in the Core Set!  What did you think to our ratings (and reasons)?  We’ll be taking a look at the Leadership cards next, same time next week.