It’s been a while since I’ve done a Deck Development article.  That’s mostly because I’ve been so busy playing games for our Showdown Series that it hasn’t left much time for experimentation.  Back in August when I was kindly invited onto the Alter-Egos Podcast (great podcast, you should check them out if you don’t already!) to take part in a Hulk pack review, I mentioned that I would revisit the green guy once the Ant-Man pack was released.  Well, that time has come!

The main cards I was interested in using in a Hulk Leadership deck were Stinger and Ant-Man (Hank Pym).  They are both cheap allies that you can dump into play to help fuel Strength In Numbers and Earth’s Mightiest Heroes. 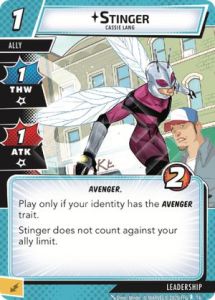 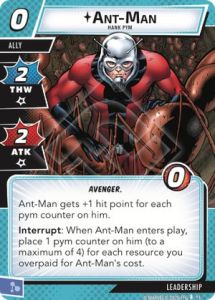 As you can see, Stinger has the added advantage of not counting towards your maximum ally limit, meaning that with The Triskelion and Avengers Tower it is possible to have six allies in play at the same time!  Obviously, this isn’t go to occur all the time, but the potential has been raised by Stinger’s release. 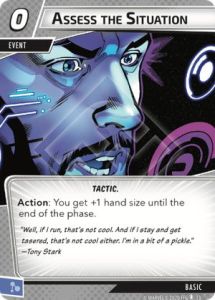 Another new card from the Ant-Man pack that I wanted to try out was Assess the Situation.

Unlike Stinger and Ant-Man (Hank Pym), I wasn’t aware of this card until shortly before its release.  Hulk often ends up with a card or two in hand and no means to play them, so I think that this might be decent filler for his deck.  I’d give it a try, anyway!

I think that this card might be useful for other Heroes as well, not just ones with low Hand Sizes.  Iron Man springs to mind, and not just because he’s on the artwork (although, one of the reasons you’d include this card in your deck is to help him with his poor Hand Size before he has loaded up his play area with Tech…).  The other reason you might include it in an Iron Man deck is because it has a mental resource (for Rocket Boots), so it’s actually looking pretty good for that deck! 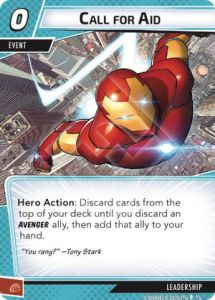 Call for Aid was another nice surprise from the Ant-Man pack.  A zero-cost event that digs for an Avenger ally and also has a physical resource on it, sounds perfect for this deck!

So that’s all of the new cards that I’d be using for this deck, time to show off the full decklist!

The other five allies chosen for the deck were included because they were cheap and had the Avengers trait.  That being said, Hawkeye (Kate Bishop) is pretty good in a Hulk deck, as she can turn a spare card that would normally be discarded thanks to Hulk’s Enraged ability into some damage.  Hawkeye (Clint Barton) is nearly an auto-include in a Leadership deck thanks to his usefulness versus minions though.

Deck space was tight and I decided to not include Make the Call for now, but other than that the events were all of the ones mentioned above.

In the resource section I didn’t include any copies of The Power of Leadership because Hulk has two copies of Limitless Strength and that more than makes up for it.

For supports, obviously Avengers Tower and The Triskelion had to go in to fit with the gimmick of lots of allies.  I included one copy of Team Training as it is a flat +1 increase to the Hit Points of all my allies, which is a massive value increase.

I skipped adding any additional upgrades altogether (as mentioned, deck space was tight).  If you’ve read any of our other articles, you’ll know by now that we like to test decks out by playing lots of games and this article is no exception!  I decided to begin where we all began, with Rhino on Standard difficulty.

Losing to threat in game 1 was done in the usual manner versus Rhino; Advance was the encounter card that round (I was in Hero form as well).  Not much that Hulk could do about that.

During game 3 something incredible happened; thanks to Strength In Numbers and a Limitless Strength, I was able to play both copies of Hulk Smash in one attack!  It was a completely unnecessary amount of overkill, but fun nonetheless.

A clean sweep against Absorbing Man, but that’s not too surprising.

The only thing of note was that I found Hawkeye (Kate Bishop) to be particularly useful on several occasions during these games. 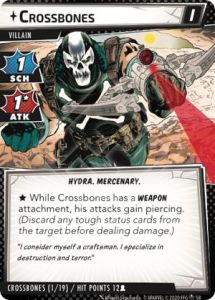 Poor Crossbones!  His very low Hit Points total made these games too easy.  Hulk was able to just brute force his way through the scenario every time.

What did I find out playing against Klaw?  I found out that Hulk, and this deck in particular, does not like Sonic Boom!  That card is harsh.

In game 2 I was very close to defeating Klaw but Advance popped up and he schemed out.  Oh well! 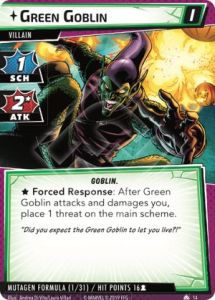 I got off to a winning start then lost the next two.  Just too many minions to deal with in this scenario I found.

Hulk doesn’t like guard minions as they slow him down quite a bit, so Goblin Thrall was always an annoyance.

This is a brutal scenario for Hulk.  Keeping on top of the side schemes was next to impossible and Red Skull is quite capable of throwing some roadblocks in the way (The Sleeper, for instance).  Still, I was pleased to get at least one win!

So the first draft of the deck went 11-7, not too bad.  It was at this point that I decided to make some changes.

It wasn’t very often that I was able to get both Avengers Tower and The Triskelion into play at the same time (I never had the magical six allies out at the same time either).  Avengers Tower is a useful card, but it does restrict you to only playing allies with the Avenger trait if you want the increased ally limit.  I made the bold decision to cut it from the deck.

This opened the door for Maria Hill and also Lockjaw.  I still needed to keep a good chunk of Avengers allies in the deck for Earth’s Mightiest Heroes and Call for Aid though, so I only removed Black Knight to make way for the new allies (he hadn’t proven particularly useful so far and he was the joint most expensive ally with Hawkeye (Clint Barton)).

Assess the Situation was sometimes useful, but with card slots being so tight in this deck I made the decision to cut it.  In its place I caved in and added two copies of Make the Call (which really is too good not to include in nearly any Leadership deck) and an extra copy of Team Training.  You can only have one copy of Team Training in play at a time, but I think that it’s a crucial card for this deck and needs to be played as soon as possible.  It has a physical resource on it, so the extra copy isn’t going to be a hindrance.

With those changes made, I decided to play some more games.  I skipped Rhino, Absorbing Man, and Crossbones this time since they were easily defeated last time, and went straight for Klaw.

In game 1 my first copy of Team Training was discarded by Caught Off Guard (a card that this deck has a bit of a weakness towards).  To add to that, in the same game I had Masters of Mayhem come out of the encounter deck while Radioactive Man and Melter were in play, to then be followed with Gang Up (I had just cycled through my deck and got an extra encounter card).  Needless to say, I was defeated.

Relatively smooth-sailing this time.  The extra bit of thwarting I included really made the difference (and access to Lockjaw helped too).  Very happy with these results.

Two wins this time.  Red Skull felt a lot less hopeless than the last three games I played against him. 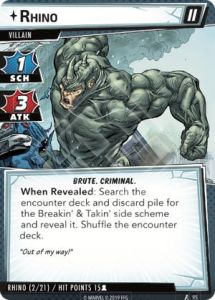 I decided to up the difficulty to Expert and take on Rhino.  I may have been getting a bit overconfident after winning in game 1 and was brought swiftly back down to earth in games 2 and 3.

Rhino is a fairly swingy scenario though.  James has recommended to me that I should use Crossbones as a sounding board for testing decks and that’s not a bad shout.  Anyway, after 30 games with Hulk I needed a break (and had some Showdown matches to get played!).

I had fun with this deck.  It’s definitely very gimmicky, but that seemed to suit Hulk quite well.  I am very tempted to test this deck out against more opponents on Expert difficulty.  If I have time, I will!

If you have any comments or suggestions, please let us know.  Please also consider liking our Facebook page as that is the first place that we advertise new articles.