Welcome to the draft for Season 1 of our Showdown League!  You may have seen our first three Showdown articles where we took on Crossbones, Ultron, and Taskmaster.  We decided that we quite liked playing and writing those but wanted to do something a bit more regulated, which is where this article comes in.

We are going to split the Showdown series into seasons.  Before the season starts we will choose which Villains and encounter modules we will use, then take it in turns drafting characters to use that season.

After a bit of discussion, we decided to organise the Villains into the following difficulties (based on the default encounter modules); Low, Medium, and High.  Each season we will be facing one Low, one Medium, and two High difficulty Villains.  This should make things a bit more interesting.  We might also alter the encounter module to spice things up a bit as well.

Below are how we have rated the Villains so far.  We will revisit these ratings each season.  Also, we haven’t included Risky Business and Wrecking Crew in these ratings.

These ratings will be subject to review before each season.  For example, we haven’t played enough Kang to determine where he should go, but we’re not using him this season so it’s a moot point for now.

All currently released Heroes will be available for the draft.  However, in our opinion not all Heroes are created equal.  While we pretty much always play on Expert difficulty, that’s not always an appropriate challenge for every Hero.  Therefore, we are going to tailor the difficulty we use to the Hero we are using (this will also affect our drafting decisions).  Here are our current ratings: 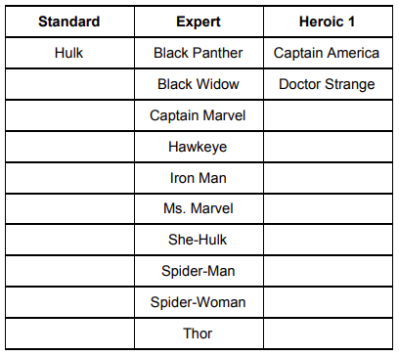 Just like with the Villains, these ratings will be up for review each season.  I suspect that Captain Marvel should be in the Heroic tier, but we’ll see how it goes this season.

We will begin by taking it in turns drafting characters that we will be using that season.  Once that is done, we will draft aspects that we are going to use for each Villain.  One consideration with regards to the aspects is that we will make sure that we use each aspect an equal number of times (this means we can’t just pick Leadership every time for some easy wins!).

This season we will be facing the following:

We currently have 13 Heroes available, of which we will be drafting 12.  During this season we will have to use the same Hero more than once, but to keep things interesting we must use a different aspect each time for that Hero.

[Tim] Since James had a slightly harder time of things in Season 0, we’re going to let him have first pick of the Heroes.

[James] Thanks, Tim. For my first pick I’m going to choose Captain Marvel.

[James] That’s an excellent choice. Definitely a character I had my eye on too. For my second pick I’m going to choose Hawkeye.

[Tim] Damn, I was going to go for Hawkeye as my second pick!  Okay, I’ll go for Iron Man.  I quite enjoyed playing him again recently.

[James] More than happy for you to take Iron Man off the table. He’s not a character I’ve enjoyed playing that much in the past. I’ll go for She-Hulk. Not the strongest of characters, but she’s one I enjoy playing.

[Tim] A bit like with you and Iron Man, I’m happy for you to pick She-Hulk.  I’ve never really got on very well with her if I’m honest.  My third pick will be Spider-Man.

[James] Spider-Man is a very solid choice. For my fourth pick I think I’m going to branch out with a character I did not use in Season 0, and call Thor. Hope I don’t regret going for two characters with that dreaded hand size of 4.

[Tim]  That’s a good point about choosing a character that you didn’t use in Season 0; I should probably do the same!  I’ll go with Black Panther as my fourth pick.

[James] Think it’s time to be brave and pick a Heroic level character. I’ll have Captain America as my next pick.

[Tim]  I’ll have to pick a Heroic character as well then!  I’ll go with Doctor Strange.

[Tim]  Nice, Spider-Woman is a good character and probably should have been higher than 6th choice.  That leaves me with a decision between two of my least-favourite characters; Black Widow and Hulk.  I’ll go with…Hulk. 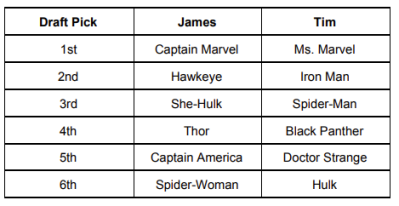 [Tim] Okay, next we should draft aspects for each Villain.  Since you got first pick for the Hero draft, if you don’t mind I’ll have first pick for the Villain draft.  Let’s start with Absorbing Man.  I’ll use one of my two Aggression picks of the season for this one.

[James] That seems like a fine choice. I’m going to use Protection.

[Tim] Hmm, that leaves Justice and Leadership.  I think I’ll burn one of my Leadership picks for this one, which means you get Justice.  Time to pick for Mutagen Formula and you get first dibs.

[James] Hmm, my first pick against Mutagen will be Aggression I think. The aspect served me well against Ultron (we don’t talk about Taskmaster) so I’ll be aiming to repeat that performance.

[Tim] Mutagen Formula is always a tough one (which is good).  Struggling to decide between Protection and Justice, but I think I’ll go with Protection for this one.

[James] That’s an interesting choice against Mutagen, I’ll be curious to see which hero you pair with Protection in that instance. For my second aspect I’ll choose Justice.

[Tim]  So that leaves me with Leadership.  We’re onto Klaw now and it’s my turn to pick first again.  I’ve had Leadership twice now, so I can’t go with that and I haven’t used Justice yet, so I’ll pick that.

[James] I have not used Leadership yet so that will be my first pick against Klaw.

[James] That’s the aspects drafted then. Just to confirm we have to use each of our heroes at least once, however, two of them will be used twice but the aspects have to be different each time. Is that correct?

[James] In regards to Spider-Woman and her unique deck building rules. When I assign her to one of the aspect slots that obviously means she has to include that aspect as one of her two. In the interest of fairness I think that if I decide to use her for a second time I should be unable to use that aspect with her again. Thoughts?

[Tim] Yeah that sounds fair.  I think we both have slightly underestimated how versatile she is going to be in this draft league.

[James] Yeah, she probably should have been a higher draft pick. Just thought it best to clear up how we’re going to use her now rather than it becoming an issue as we progress through the league.

[Tim] Yep that’s a good idea.  This should be fun.  Let’s both have a bit of a think about how to assign our characters and then finalise the fixture list for the season.

[James] After thinking over my aspect pairings for each villain I decided to assign my drafted heroes as following: 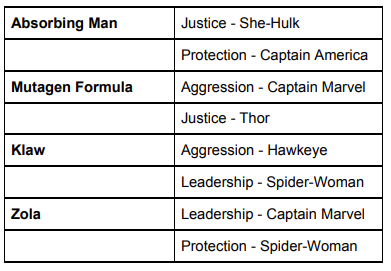 Going into the aspect draft I knew that Absorbing Man was the villain I wanted to use Captain America against, so I grabbed Protection first in order to utilise the defensive stunlock build that I used in my first playthrough of the campaign. Given the required Heroic difficulty I did not fancy using Cap against one of the harder scenarios.

Captain Marvel was my first pick of heroes because not only is she one of my favourite to play, but she also has a very good power level. For this reason I was definitely looking to use her against the difficult scenarios. Paired her with Aggression for Mutagen in order to run a similar list to the Drop Kick/Relentless Assault deck I used against Ultron in a previous Showdown, and Leadership for Zola because he’ll be the most difficult by far. Hoping to hide behind copious amounts of allies whilst charging up Energy Channel and burn through his small health pool quickly.

I decided early on Spider-Woman was the second hero I wanted to use twice as she offers a nice bit of versatility. Her deck building rules enable me to use aspects that I did not draft against scenarios where I feel that I might need them. In particular pairing Aggression with Protection to keep Zola locked down whilst I try to control the board state.

I used my remaining heroes to fill out the fixtures in aspect/scenario pairings where I think they would shine best. She-Hulk is very good with Justice, but is on the weaker side of the hero scale overall, so Absorbing Man felt like a good fit for her. Mutagen spits out minions at an alarming rate, which should generate lots of additional cards for Thor in what will be a very tough match up. Last, but certainly not least, is Hawkeye Aggression, where I’ll be looking to use Earth’s Mightiest Heroes to get off multiple arrows and/or a basic attack with Mean Swing consistently.

[Tim] After a bit of deliberation, here’s how I decided to assign my draft picks. 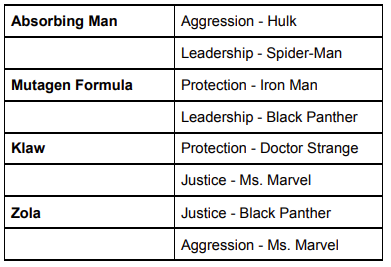 For Absorbing Man I chose to put Hulk in using Aggression.  I didn’t have much luck with Hulk versus Ultron but I was hoping that playing on Standard with Aggression would yield better results.  I also went with Spider-Man Leadership, a combination that I’ve had a lot of success with.  Against a foe like Absorbing Man I’m expecting similar results.

Mutagen Formula is a tough scenario and I went with Black Panther Leadership, a combination that is excellent for dealing with minions.  I also went with Iron Man Protection.  I’m not really a big fan of this combination, but I had some recent success versus Taskmaster using it and was confident that it would do decently.

I’d drafted Doctor Strange so I decided to use him for Klaw using the Protection aspect (probably my weakest aspect, but it doesn’t really matter what aspect you use with Doctor Strange).  I was pleased to have Ms. Marvel and I decided to use her with Justice against Klaw.  I think that cards like Clear the Area will work well with her playstyle and I’m looking forward to using them.

Finally, for Zola I used Black Panther and Ms. Marvel for the second time.  These are both strong characters and would be using favourable aspect combinations.  Zola is going to be a tough fight, but I think these two will be able to produce some good results.

So those are our draft picks, here’s our schedule for Season 1:

Please let us know what you think to this format, our draft picks, and aspect choices.