This would be our second Showdown and we decided to ramp up the difficulty and face Ultron.  With endless swarms of minions and a third stage of the main scheme where threat cannot be removed, he’s always a challenge!

Deciding that Ultron was probably already enough of a challenge, we went with the recommended module, Under Attack.  It has an annoying side scheme, couple of good attachments for the villain, and Concussive Blast aka the bane of allies.

Who would be facing Ultron?  Here they are: 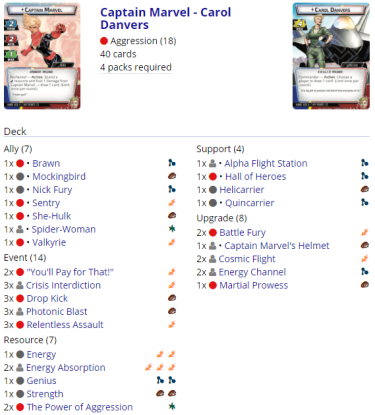 [James] Originally I toyed around with the idea of an Avengers based Aggression deck, using cards like Avengers Tower and Earth’s Mightiest Heroes alongside the aspect’s excellent selection of Avenger allies. However, I quickly ditched that idea in favour of an aggressive stunlock deck.

Drop Kick, and the ubiquitous Mockingbird, form of the core of the deck. Whilst certainly not the most consistent stunlock build it still provides ample opportunity to control the villain. I also added Relentless Assault for minion control, and “You’ll Pay for That” as additional threat control. Both these cards also have an energy resource which is always relevant when playing Captain Marvel.

For allies I wanted to include as many of them as I could find space for, especially as Aggression now arguably has access to the best allies in the game. Brawn offers good threat control, Sentry’s statline is just ridiculous, She-Hulk can provide some nice damage and is another 2 thwart character, and Valkyrie is useful for pinging off minions.

Helicarrier, Quincarrier, Martial Prowess and The Power of Aggression are all here to help out with the cost of paying for so many expensive allies, or fulfilling the physical resource requirement of Drop Kick.

A slightly wobbly start to the games, but overall a solid result.

Drop kick did so much work throughout, as its ability to cause Ultron II to miss an attack gave me much needed breathing room to deal with the drones in play. I was worried about being able to consistently generate three physical resources in a deck that is so energy hungry, but it was never an issue. “You’ll Pay for That” was not a card I played a lot, but when I did it was always impactful, and I even got to live the dream of playing Crisis Interdiction with a Cosmic Flight in play. 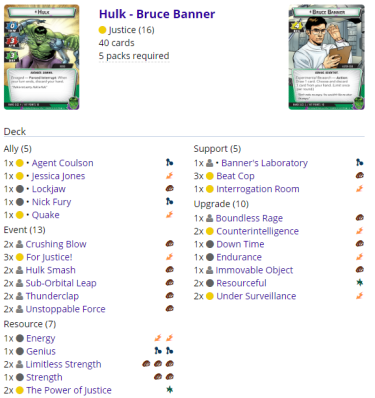 [Tim] I chose Hulk because someone had to and I thought that I’d get it over and done with.  I’d been using Hulk Justice in some recent games and managed to beat Rhino, Klaw, and Mutagen Formula all on Expert.  I hadn’t beaten Ultron yet but I was determined to persevere.

Because of Hulk’s Enraged ability (where you have to discard your hand at the end of your turn), I favoured cards that would stay in play such as Under Surveillance, Counterintelligence, and the vaunted Beat Cop.  I still included For Justice! though, as it’s just too good of a card not to.

I included The Power of Justice and a couple of Resourceful to help smooth out turns but also to get rid of any attachments that pop up, especially Upgraded Drones.  It’s not the extra Hit Points that are the biggest issue with that, it’s the extra Attack.  The drones can pile up pretty quickly and the extra Attack makes short work of his Hit Points.

For allies I included Agent Coulson, Jessica Jones, and Quake from the Justice aspect, then Nick Fury and Lockjaw from the basic cards.  I’m a fan of Lockjaw and I think that he is always useful in a Hulk deck because it always gives you something ‘useful’ to play.  As for Nick Fury, I think that he’s another one of those ‘too good not to play’ cards.

Erm.. it didn’t go too well.  There was always just too many drones!  I think that Hulk and Justice just aren’t able to cope with that many minions.  The best I was able to do was get Ultron to stage 3 and deal about five damage to him before being overrun.

As for my experience using Hulk, it was not fun.  He was completely outclassed by Ultron.  I’d be tempted to try again with Aggression or Leadership, as they are much better suited for dealing with minions. 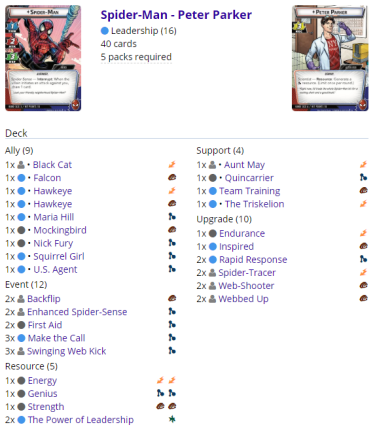 [Tim] In our Character Focus series I found Leadership to be Spider-Man’s most successful aspect pairing for solo.  Spider-Man has some excellent cards but struggles with removing threat, but that’s something that the Leadership allies can cover for him.

Leadership is particularly good for the Ultron scenario thanks to Hawkeye (Clint Barton) and Squirrel Girl, along with ways to keep getting them back (Make the Call and Rapid Response).

Since I used Spider-Man in the Character Focus series there have been a few new cards that I’ve added to his deck.  U.S. Agent seems like a good one for dealing with the Ultron drones, particularly with his Retaliate.  There’s another Hawkeye (Kate Bishop) who is cheap and able to deal with drones as well.

Finally, there is Team Training.  This card is so good that I’d consider it an auto-include in ally-based Leadership decks (which is pretty much all of them at the moment).

I included one copy of Inspired just for Black Cat, and also a couple of copies of First Aid just for a general purpose heal.

A clean sweep!  I’m not too surprised, as not only is Leadership very good against Ultron (and in general) but Spider-Man works well with it.

The Triskelion came in handy in most of the games.  As soon as you get Black Cat into play she is probably going to stay in play for the remainder of the game (barring multiple Concussive Blasts), which reduces the number of other allies you can have, which makes The Triskelion useful.

If you are looking for a good deck to beat Ultron Expert in solo, I can highly recommend this one! 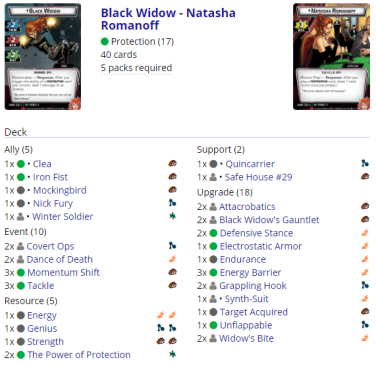 [James] With this deck I was aiming for a hybrid of Protection’s two differing play styles, which are stunlock (sensing a pattern here?) and defence.

On the stunlock side I included Tackle, which gives Black Widow a secondary attack event alongside the villain control it offers. Iron Fist is the key piece though, and may just be the best ally Protection has in its limited pool. This character can stun the villain twice, dealing a nice chunk of damage in the process, and is a card I’ll be wanting to play frequently.

On the defence side of the deck we have Electrostatic Armor and Unflappable. This combo increases the value of using Black Widow’s basic defend ability, which helps offset the downside of being exhausted in my next turn. Energy Barrier is also a fantastic source of damage mitigation and minion control, which should come in handy in dealing with those pesky drones.

Typically you would expect to see Desperate Defense in this type of deck, however, I opted for Momentum Shift instead. Due to playing true solo I thought the additional attack, and minor healing, was more desirable for Black Widow as she’ll need the extra damage output to close out games, and is aiming to ready with Synth-Suit anyway.

In regards to Preparation cards I added Defensive Stance to give her a little more survivability, and a copy of Target Acquired primarily to counter Taskmaster if he were to ever appear as a boost card.

Well that was absolutely brutal. Despite going into this showdown fairly confident none of the games were even close. I don’t think there’s anything inherently wrong with the deck, it just felt like a very bad match up. That being said I’ve really not done Black Widow Protection justice here.

Poor result aside, I was happy with how the deck played for the most part. Iron Fist always felt impactful, and remains the reason to play Protection in my mind. Momentum Shift is very solid too. I would cut Electrostatic Armor and Unflappable in favour of more allies though.

Ultron managed twelve wins out of twenty!  In fairness, the ones where Ultron won all five games were bad aspect and character combinations to face him with.  I think perhaps hubris had got the better of us!

On the positive side, this has given me a few ideas concerning future Showdowns; running seasons, drafting characters at the start of a season, adjusting difficulty played depending on hero used, etc.  Expect to see some of this relatively soon.

We’ve still got five heroes that we haven’t used yet, so we’re going to do at least one more Showdown in the current format though.  We hoped you enjoyed Ultron teaching us a lesson in humility!