In Part One we took a look at Doctor Strange and his cards.  In this part we are going to take a deck for each aspect through the gauntlet of scenarios on Expert difficulty and see how we get on.

Mutagen Formula is always a mixed bag and sometimes you end up in a death spiral from the beginning.  This was the case in two of the games here, as I was constantly trying to stabilise the board.  The other scenarios were defeated on the first attempt.

My MVP for Justice was Followed.  Justice is excellent at dealing with side schemes and Followed provided a nice little damage boost.

I didn’t find Quake to be very useful, and would probably replace her with Stealth Strike or Concussive Blow. 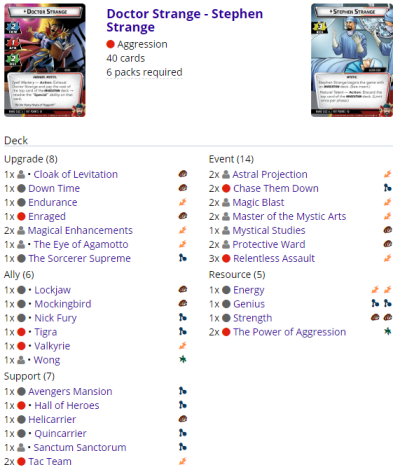 Smashed it with Aggression!  Relentless Assault easily got rid of minions (something that Doctor Strange sometimes struggles with) and was my MVP.

Since the release of Hulk, I would change this deck a lot to incorporate the new excellent allies and other cards.

As expected, Leadership breezed through it.  My MVP was Rapid Response, as it allowed me to keep Hawkeye in play for most of the game versus Ultron and a supercharged Vision versus Mutagen Formula.

Another 4-0!  Slow and steady wins the race in this instance.  Mutagen Formula was a tough one just due to how many minions kept popping up.  I had to use Crimson Bands of Cyttorak and Magic Blasts to wipe them off the board.  A couple of times I even used Nick Fury’s four damage option to keep them under control (normally it’s best to draw 3 cards).

My MVP would probably have to be Med Team, as it kept my allies alive longer and reduced the number of times I had to go back to Alter Ego form and Recover.

Even though Justice was in 4th place, it really was only down to some particularly brutal starts to Mutagen Formula.  I think that Justice is pretty good for Doctor Strange.  All three other aspects cleared all scenarios on the first attempt, which wasn’t a surprise for Leadership, but I did expect a couple of blemishes on the records for Aggression and Protection.

Mutagen Formula is always a tricky one just due to the opening wave of encounter cards.

Here is my Character Focus league final results (I am changing the format after this one, see below):

I don’t think that anyone is surprised that Doctor Strange went into first place.  I was surprised at how few games I lost though, as I thought a few more sequences of cards would cause his downfall.

And here’s my table for character & aspect combos:

Doctor Strange is a very powerful character due to how effective his Invocation deck is and the ease of access to it.  He can play very well with any aspect, so if you like Doctor Strange feel free to use whatever you like with him!

Hulk has just been released but I won’t be doing an article in the same style as this one with him.  There are a couple of reasons for that.  The first one is that I need to play more games with Hulk before I run him through a gauntlet.  The second is that I’m going to change the way that I do these gauntlet-style articles, but I’m going to talk about that in my next article (due Wednesday!).