Despite being a relatively new Marvel Champions content creator, we’ve been lucky enough to receive an exclusive spoiler for The Rise of Red Skull campaign expansion.  So without further ado, here is Skilled Investigator!

Skilled Investigator can be exhausted to draw you a card when a side scheme is defeated and you are in Hero form.  As a primarily solo player, this will just be whenever I’m in Hero form and defeat a side scheme, but in multiplayer it can potentially spread the wealth.

Since this can be put into play under any player’s control (with a maximum of one per player), the Justice player could include enough copies for up to three players to have one each.  Then, when a side scheme is defeated, everyone in Hero form could draw a card.  I’ve played enough multiplayer games to know that you’ll often use your Avengers Mansion or Helicarrier on your team-mates, so this will be another card that benefits your group as a whole.

Unless the scenario has no side schemes (or only ones like in Wrecking Crew that cannot be defeated) then Skilled Investigator will likely be making its way into all of my Justice decks as it’s a solid card.  There’s not really much else to say other than this will be a nice boost for Justice decks!

Thanks again to Fantasy Flight Games for providing us with this spoiler!  Please don’t forget to check out other content creators during August for more The Rise of Red Skull spoilers (check the picture below for the current schedule), as well as Hall of Heroes for the full list. 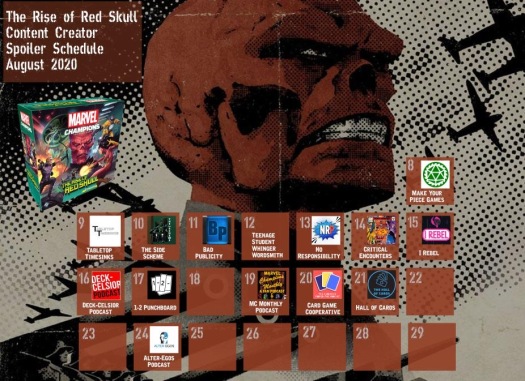