In Part One we took a look at Black Widow and her cards.  In this part we are going to take a deck for each aspect through the gauntlet of scenarios on Expert difficulty and see how we get on. 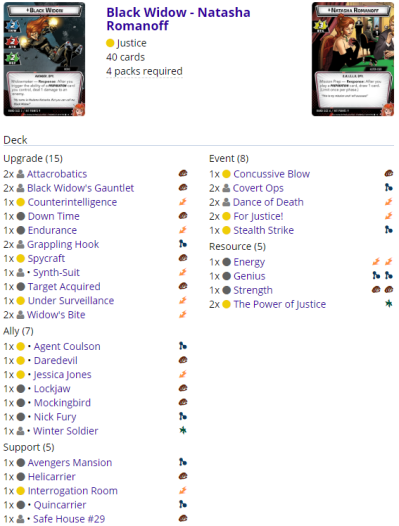 Black Widow worked very well with Justice.  Ultron and Mutagen Formula are always tough scenarios, so losing once to each of them is not terrible.

With how many cards Black Widow has in play (20+ towards the end of a game), having single copies of cards like Concussive Blow or Stealth Strike was about right, particularly as they complement her three-cost events in her hero cards. 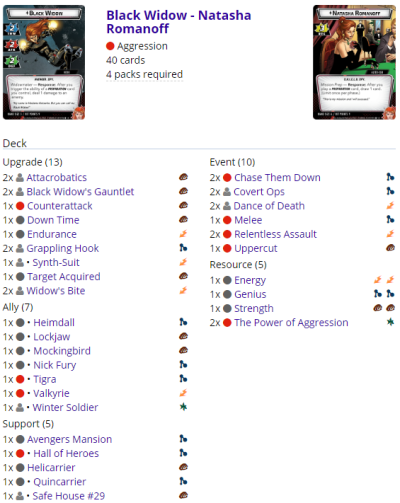 Very good record except for against Ultron; I just couldn’t beat him with Aggression!  If I were specifically tailoring the deck for Ultron, I’d include Hulk and try to get his 1 damage to everyone result to trigger more often (by including a larger than normal number of energy resources), but for this gauntlet I didn’t think that Hulk was worthwhile.

My MVP for Aggression was Relentless Assault.  Arguably one of the best cards in the game, it’s no surprise that it really pulled its weight. 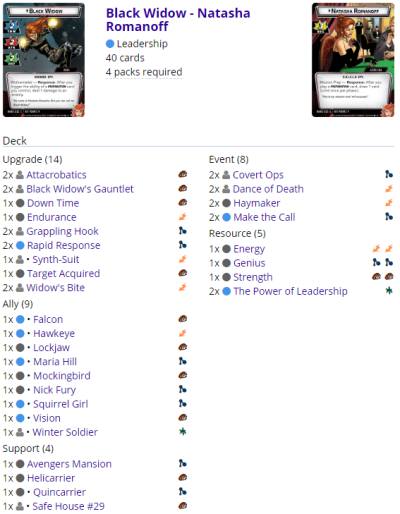 Hey guys, did you hear that Leadership is quite powerful at the moment?  This is my second 4-0 run of this series and the second time it happened with Leadership.

My MVP for Leadership was definitely Rapid Response.  It’s already a very good card, but when combined with Black Widow’s Widowmaker ability and Safe House #29 it gets even more powerful (as you can deal damage when you use it and then flip to Alter Ego to get it back straight away).

I know that saying a character is probably best with Leadership isn’t really groundbreaking, but in Black Widow’s case it is probably the truth, just for the Rapid Response / Safe House interaction. 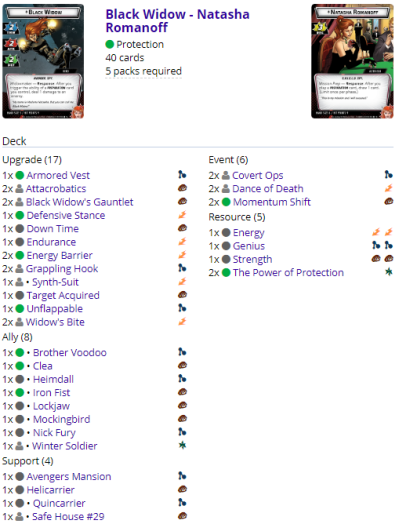 I think that I was unlucky in the Mutagen Formula games, as I really thought that I could pull out a win.  Beating three out of the four scenarios with Protection wasn’t too bad I thought.  Threat was almost always the issue.

My MVP for Protection would have to be Momentum Shift.  Once you’ve got set up a little bit, Black Widow doesn’t end up taking much damage, so to be able to heal and do damage while in Hero form helps out a lot.

Leadership was the top of the table, surprising no one.  But in Black Widow’s case I really think that it has very strong synergies, rather than just being good due to ally spam being effective.

Rhino easily beaten as usual and Ultron proving the most difficult overall this time!

Here is my Character Focus league so far:

Black Widow goes into 4th place!  She has the same record as Black Panther, but I placed her higher because she had a 4-0 and he didn’t.

And here’s my table for character & aspect combo results so far:

Black Widow is an effective character for sure, but I just don’t like her playstyle.  Anyway, just Doctor Strange to go!  I’ve got some new ideas for what we’ll be doing once Hulk has been released.