It’s time to talk about the elephant in the room that is Captain America.  Widely considered to be the best character in the game (at least until people have given Doctor Strange and his invocation deck a whirl!), let’s take a look at his cards and see why that might be.

Hand Size 6 and 11 Hit Points are average, but 3 Recover is low. I think that was a deliberate design choice to make him have at least one area that he is poor at, because the rest of his stats and abilities are good.

Living Legend reduces the cost of the first ally played each round, which in multiplayer is also usable by other players (whether you like it or not!).  Saving one resource to play arguably the best card type in the game is nice and definitely makes up for having to be in Alter Ego.

Captain America without his shield would be weird, so it’s good that his other ability is a setup one that allows you to search your deck and discard pile for it.  A couple of things to note with regards to this ability.

The first is that if you draw the shield in your opening hand, you can discard it with your mulligan and then retrieve it after you have redrawn, resulting in a seven card hand to begin the game with.

The second is that if you don’t have the shield in your opening hand, then discard some cards as part of a mulligan and then draw it, you will only have a six card opening hand.  This is unlikely to happen too often, but it might affect your mulligan decision.

Overall his Alter Ego is pretty good and at least gives you some benefit to flipping to it. 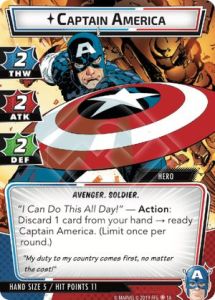 With stats of two across the board, Captain America is flexible.  Especially so with his “I Can Do This All Day!” ability where he can discard a card once per round to ready himself.  This ability means that you can attack and thwart in balance or double up on one when you need to.  You can also defend in the preceding Villain Phase and ready yourself without having to use cards like Indomitable or Desperate Defense (although those would be handy if you plan on defending a lot!).

Captain America’s hero form is great simply because it can do whatever is needed to be done.  The easy access to being able to ready his character card means that he can get a lot more done with his basic stats.  If you have cards that improve those basic stats (Heroic Intuition, Combat Training, Armored Vest, Down Time), then the effect is boosted. 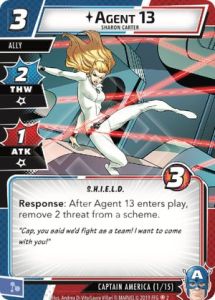 Three resources for a 2/1 with 3 Hit Points is quite reasonable, but Agent 13 has an added bonus of removing 2 threat from a scheme when she enters play.  This means that over three rounds she could remove a total of eight threat (if you didn’t block an attack with her), all for three resources!  Definitely one of the best allies in the game, especially as losing due to threat is probably the most common method of defeat.

There are two copies of this in his hero cards and when combined with his “I Can Do This All Day!” ability and/or something like Heroic Intuition, leads to a LOT of threat being removed.  What’s also great is that it replaces itself straight away!  A nice little card!

There are three copies of this in his hero cards and has been a large part of why Captain America stunlock decks are a thing.

If you compare this to Swinging Web Kick, it does two fewer damage and requires a physical resource to get the additional effect.  Captain America is easily able to generate a physical resource through cards like Super-Soldier Serum (of which there are two among his hero cards) and Quincarrier.  This means that most of the time this will also be stunning an enemy (probably the Villain).  That’s almost certainly worth the slight reduction in damage done.

Great card that you’ll always want to try and play if you draw it!

There are two copies of this in his hero cards and it can literally be a lifesaver!  It requires that you have your shield in play (which unless you got unlucky with a Caught Off Guard you should be fine) and that you exhaust it, but that’s a small price to pay to prevent all the damage from a hit.

In scenarios like Rhino where he has one or more Charge attachments, you’ll find this card very welcome.  Heroic modes where Villains hit harder will also appreciate this card.  It’s also worth mentioning its use for things like stopping Green Goblin adding threat to the main scheme after he damages you, or Klaw stunning you with his Sonic Converter.

Another great card for Captain America (it seems to be his running theme!).

There are two copies of this in his hero cards and it’s a great one for dealing with chunky minions, particularly in the Mutagen Formula scenario.

It’s going to cost you cards from hand and bounce your shield back to your hand afterwards, but if you really need to defeat a load of minions, it’s probably worth it.  It’s important to be aware that Guard minions will stop you targeting the Villain with this, but it’s definitely a good board clearance tool. 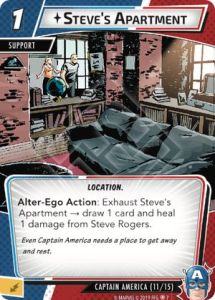 Slightly makes up for Steve Rogers’ poor Recover stat and also draws you a card.  This is a nice support card that you probably won’t end up using too often because you’ll want to be in Hero form smashing face, but it is a good card to have for when you must be in Alter Ego though.

This is a card that I think will be discarded for a resource 95% of the time in difficulties below Heroic, but once you start doing some Heroic games you’ll want this as a safety net.  Great for those times when the Villain unexpectedly attacks again (or again and again!).

What more can be said about this card other than it’s great and it wouldn’t be Captain America without it?  The extra defence will put Cap at three and the Retaliate 1 will be a great boon for passively damaging enemies.

So far, the only non-hero card with Restricted is Jarnbjorn, so that’s unlikely to be an issue any time soon.

This is such a good card and key part of Captain America’s playstyle that if you are ever in a situation where it is not in play you’ll feel like something is wrong.  Thankfully, these situations are currently rare.

There are two copies of this in his hero cards.  It’s very good because it can help trigger the additional effect of cards like Heroic Strike and makes playing Jarnbjorn quite reliable.  It’s also not restricted to being usable only in Hero form, like God of Thunder or The Eye of Agamotto.  Fantastic card that you’ll want to get into play as soon as you can.

Captain America is an excellent character fully capable of beating every scenario with every aspect.  He is a good choice to lend to a friend that you are teaching the game to, as he definitely plays like a powerful superhero.

In part two of this article I will run Captain America through the gauntlet of scenarios with every aspect, and I wouldn’t be surprised if he dethrones Captain Marvel from the top of my current league table.  Anyway, that’s all for now!