In Part One we took a look at Spider-Man and his cards.  In this part we are going to take a deck for each aspect through the gauntlet of scenarios on Expert difficulty and see how we get on.

I really struggled with Ultron and was actually unable to beat that scenario within three games; I couldn’t deal with the large amount of drones being spawned.

Concussive Blow was a very handy card in general as I could use it before flipping back to Alter Ego form and not have the Villain scheme (because they were Confused).

I’d be tempted to remove Foiled! and add three copies of Stealth Strike, as it would provide more damage and a potential for a small amount of threat removal. 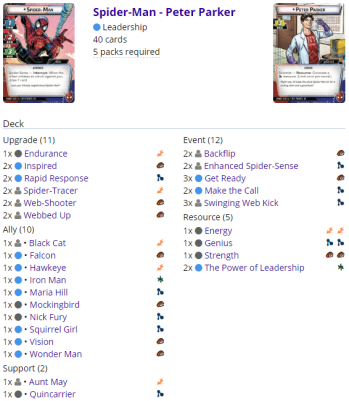 Well that was a first in this Character Focus series, a clean 4-0 win!  This combination just really clicked and I also managed to get my quickest ever win on Rhino, only five rounds.  I could just have been fortunate with the order of the encounter decks, but none of these games felt like a particular struggle.

It’s no surprise that Hawkeye was very good in the Ultron scenario, particularly when combined with Rapid Response.  Black Cat with Inspired is a great combo on its own, but turned Get Ready into some free damage.

Leadership is widely stated to be the current best aspect in the game and I wouldn’t disagree with that.

I managed to beat all the scenarios with Aggression, which was definitely a surprise!  If you look at my decklist for this run, you’ll see that I chucked some dubious cards that could remove threat in it, most notably Heimdall and Lockjaw.  As it turned out, I got Heimdall into play in most games, then used him to remove two threat every turn.  This is obviously a desperate measure (due to his cost), but it worked to a certain degree.

Tigra and Tac Team were very good in the Ultron scenario and were a big part of why I managed to win that first try.

I don’t think that Aggression is a great aspect for Spider-Man at the moment, even though I managed to get reasonable results with it.

I wasn’t able to beat Klaw with Protection Spider-Man.  The main issue that I had was unsurprisingly threat removal.  In hindsight, perhaps I should have included Heimdall in this deck (like I did in my Aggression deck).

Ultron also gave me a lot of trouble, mostly because when you push Ultron over to stage 3 and Ultron’s Imperative is put into play it’s a lot to deal with in a short amount of time.

This deck performed at its best when Black Widow was in play with an Honorary Avenger attached.  With three Med Team in the deck it was easy enough to keep Black Widow out indefinitely (allowing her to remove two threat each round).  The icing on top was if I had Quincarrier or Web-Shooter in play so that I could always generate a mental resource to use her ability.

I don’t like this aspect with Spider-Man (in solo at least) with the current card pool, though I recognise that he has potential in multiplayer using Protection.

Leadership was my most successful aspect with Spider-Man, getting an impressive 4-0 result!  Aggression was the second best (thanks to the heroic efforts of Heimdall!), Justice third (just couldn’t deal with Ultron), and Protection performed the worst (just not enough threat removal).

I continued the tradition of breezing past Rhino (particularly appropriate for Spider-Man!).  I managed to beat Mutagen Formula with all four aspects, but couldn’t manage the same against Klaw and Ultron.  Leadership was by far his best aspect for me and makes him extremely viable as a solo character.

Since this is the third of my Character Focus series, for a bit of fun I’m going to put a league table up at the end of each of the articles now.

Captain Marvel sits at the top at the moment, being the only character that I’ve used so far that has beaten every scenario with every aspect.  This league table doesn’t really mean anything in a wider context, but it’ll be interesting to see how it changes over the series.

EDIT: Here’s a league table for the character and aspect combos.  Again, you can’t read too much into it due to small sample size, player skill (or lack of!), playstyle, etc.

Anyway, that’s all for now.