We’ve got a lot of time until the Hulk pack is released, so rather than my recent scattershot approach to character and aspect combos, I’m just going to go through them all!  In this series of articles I will take a look at each character and their fifteen signature cards, then make a deck for them with each aspect and play some games!

I decided to start with Tony Stark/Iron Man.  I’ll be honest, I haven’t used him much before now and haven’t played a single game of solo using him, so this should be interesting!  I’m going to start by taking a look at the character himself. 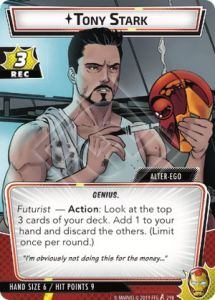 Hand Size 6 is normal for Alter Ego, but 9 Hit Points and 3 Recover are the lowest in the game.  Tony’s Hit Points are less of an issue once you start playing his armour pieces, as three of them boost this total.  His Recover value is awful though, so I’d be tempted to put a copy of Down Time in his deck to mitigate this.

Tony’s Futurist ability is great.  At the very least you are drawing a card which might help you that turn, but you might also generate an additional benefit based on the cards you discard and the order that you discard them.  This plays into three of his hero cards, Stark Tower, Pepper Potts, and Rocket Boots.  All three of those cards care about what it is in your discard pile.  Obviously, this ability will hasten the speed at which you go through your deck, but that’s something you’ll have to live with when playing Iron Man (Repulsor Blast is a bigger culprit!). 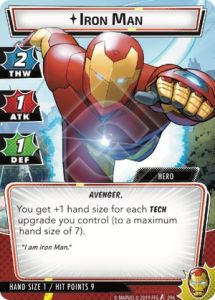 Two Thwart is enough that schemes won’t feel insurmountable (and Iron Man has a way of readying himself, more on that later).  One Attack is abysmal and you’ll probably only be using your basic attack to clear a Stunned status or ping off a Tough status.  One Defence is also awful and means that you’re unlikely to be defending much (last resort only, etc).

His ability is very limiting early on in the game and means that you’ll be wanting to drop as many Tech upgrades into play as quickly as you can.  Other than his signature cards, the only Tech upgrade currently available to him is Energy Barrier (an excellent card).  There is another Protection Tech upgrade being released in the Hulk pack, Electrostatic Armor, but that’s still a way off yet.

This means that in the first few turns you’ll be desperately playing Tech upgrades so that you can flip to Hero mode and actually impact the board state.  You’re probably going to want at least three Tech upgrades before you flip, as less than Hand Size 4 is really pushing it.

On the positive side, this ability gives you the potential to get up to Hand Size 7 in Hero mode, which is the highest in the game.  With that many cards and Tech upgrades in play, you’re likely to have some big turns!

Iron Man also has the Avenger trait, which isn’t particularly noteworthy at the moment, as the only hero that doesn’t is Ms. Marvel. 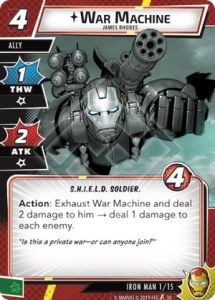 1 Thwart and 2 Attack for four resources is not great.  War Machine does have 4 Hit Points (which is slightly above average), but it’s his ability that makes or breaks him.  Being able to exhaust him to deal one damage to all enemies will be great in scenarios with lots of minions, such as Ultron or Mutagen Formula.  In ones with less minions, like Rhino, you’ll probably ending up pitching him for his wild resource.

His traits, S.H.I.E.L.D. and Soldier, are not currently relevant.  Overall, I would say that he is situationally useful and is probably one of the weakest signature allies so far. 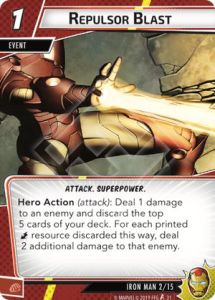 There are three copies of this in his hero cards and is one of the swingiest events in the game, able to deal 1-13 damage.  It’s likely be one of those cards that you make all deckbuilding choices with in mind, as towards the end of the game you’ll be wanting to use it to burn the Villain down.

Due to Iron Man’s playstyle, towards the mid-game you’ll have a lot of cards in play (fifteen doesn’t seem unusual), meaning that your deck is likely only around twenty-five cards.  If you want to make good use of this card (and why wouldn’t you?  It can deal a lot of damage for only one resource) you’ll want to make sure that the cards cycling through your deck have energy resource symbols where possible.  This will end up being the tiebreaker when you are making a decision between cards to put in your deck.

It’s worth remembering that this event does require some careful timing on your part.  If you use it when there are less than five cards in your deck, you don’t reshuffle and flip any more cards, meaning that you are wasting potential damage. 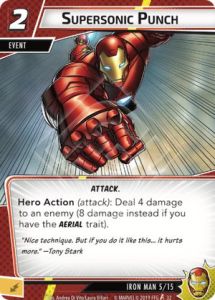 There are two copies of this card in his hero cards and at its worst it’s a better version of Haymaker, while at its best it’s a cheaper version of Swinging Web Kick.  It’s fairly easy to gain the Aerial trait via another of Iron Man’s cards, Rocket Boots.  This is simply a good card. 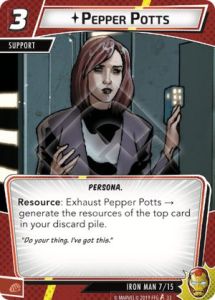 With the same cost as Helicarrier and Quincarrier, it seems reasonable to make a comparison.  In a solo Iron Man deck, I think that Pepper Potts is better than both of them.

She can always generate at least one resource (effectively on par with Helicarrier), and since you can control what the top card of your discard pile is (to a certain degree) she can sometimes generate two resources.  Quincarrier can generate a wild resource, which makes it very flexible, but the trouble is that you must have the Avengers trait to play it.  Normally this wouldn’t be an issue, but Tony Stark doesn’t have the Avengers trait, therefore can’t play Quincarrier until he flips to Iron Man, something that you don’t want to do until you have enough Tech upgrades. 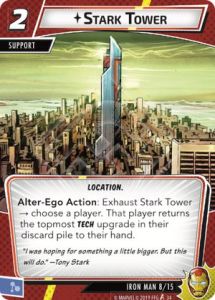 I think that outside of Protection (where you can retrieve Energy Barrier), this card is mostly only useful early game.  You can chuck Tech upgrades from hand to generate a resource, then grab it back with this (to hopefully play).  As the game goes on, you are likely to have all of Iron Man’s Tech upgrades in play, relegating this card to Caught Off Guard fodder.  As more Tech upgrades are released, this card will definitely become more useful.  Also, in multiplayer you can use it on other players to help them out (for example, Black Widow has four Tech upgrades in her hero cards). 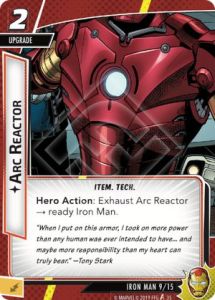 This is probably Iron Man’s best card.  Being able to do two basic actions in one round is great.  For example, you could thwart, then flip to Alter Ego mode and Recover.  It also helps against effects that exhaust your character.  Not really much else to say other than get it into play as quickly as you can! 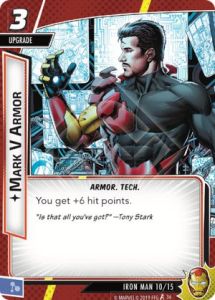 This is the main card that helps mitigate his rubbish Hit Points stat.  Having more Hit Points means that you can stay in Hero mode longer, which at the moment is how you win games.  This is a simple but powerful card. 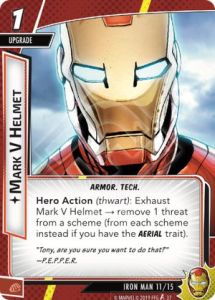 At the very worst this can remove one threat every round and for the low cost of one resource that’s great.  However, if you get the Aerial trait (see Rocket Boots) it will remove one threat from EVERY scheme.  If you’re getting snowed under by side schemes, this card will help you dig your way out.  Another great armour piece! 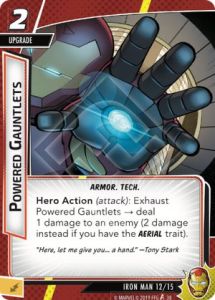 There are two copies of this in his hero cards.  They are probably the reason why Iron Man has 1 Attack.  They can deal two damage each if you have the Aerial trait (see Rocket Boots).  Great in scenarios like Ultron where you face lots of low-health minions, but also using for pinging off a Tough status. 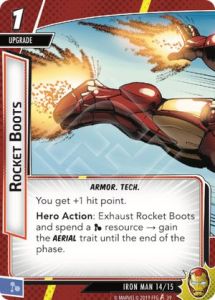 There are two copies of this in his hero cards and they are necessary for getting the most out of the Mark V Helmet and Powered Gauntlets.  The extra Hit Point they grant is useful (making Iron Man’s max Hit Points 17 with his armour pieces), but it’s definitely the Aerial trait that you’ll be wanting these for.  You should be able to activate the ability fairly easily.

Taking these factors into consideration, I will now plan some decks to use!  In my next article, I will share the decks I used for each aspect and how I got on against the Villains.  I’ll also then rank the aspects in order of best to worst for Iron Man (in my opinion at least).  Until next time!