You might have noticed that unlike the other Deck Development articles I have done recently, I haven’t put the aspect that I was using in the article’s title.  That’s because I changed which one I was using during my scenario gauntlets!

I originally went with the Protection aspect for cards like Defensive Stance (a preparation card to help with Black Widow’s Widowmaker ability), Energy Barrier, and Iron Fist.  However, I found that this made her too defensive.  While she could take a beating, she wasn’t able to dish much damage back.  Combined with Protection’s current lack of decent ways of dealing with threat, made for a fairly ineffective deck. 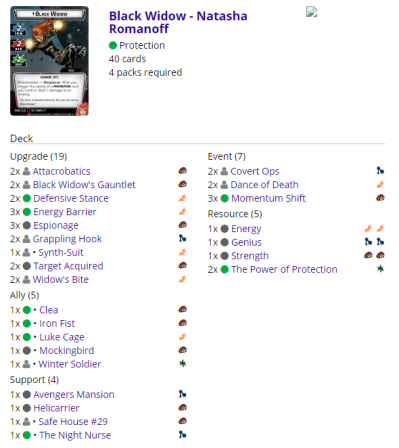 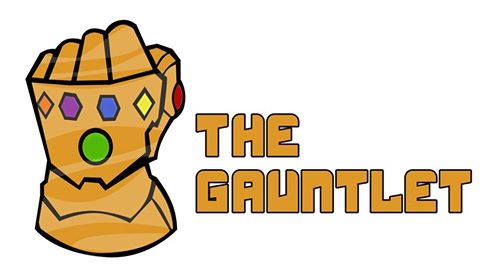 At this point I was getting bored and decided to stop.  A 5-4 record isn’t terrible, but three of those wins were against Rhino.  The main thing was that it just wasn’t much fun to play, so I made the change to Justice (the aspect that Black Widow’s starter deck uses).  It has one more preparation card than any other aspect at the moment, which was another reason. 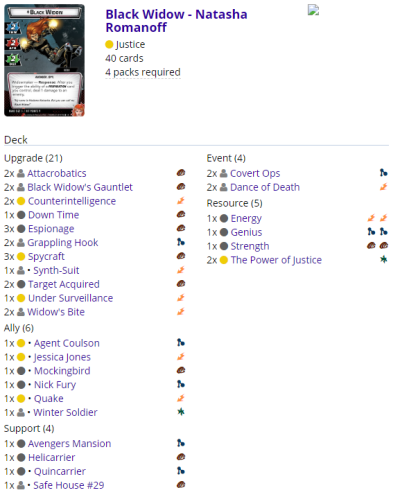 Agent Coulson is a good card for Black Widow.  Not only does he have a good thwart value, but he can go and fetch you a preparation card from your deck or discard pile.  Counterintelligence and Spycraft would definitely be better preparation cards than Defensive Stance, so I was more confident going into the gauntlet with this deck.

However, after four games I decided that I wasn’t quite doing enough damage, so I made the following changes.

Haymaker isn’t the best card in the world, but in a deck struggling for damage it would have to do.

Black Widow beat Rhino 3-0 as expected, but did so reasonably quickly.

She was also 3-0 versus Klaw, but those were some of the longest games I’ve played so far.  Eighteen rounds to beat him with Legions of Hydra!

1-2 versus Ultron was disappointing, but in the game where I lost on the second round there was not much opportunity to avoid a quick demise.

2-1 versus Mutagen Formula was a good result.  Those turns where Green Goblin hands you a load of encounter cards are really punishing (in the game where I lost on round 4, it was basically already over on the first round, I just managed to drag it out a bit longer).

So 9-3 overall isn’t bad, but that’s only one better than I did with Thor and he was a lot more fun to use.  That being said, in Thor’s gauntlet I didn’t vary the encounter module, so perhaps that might bring his score down a bit.

This is what my Black Widow Justice deck currently is.  When playing the deck it helps out a lot if you can get her Synth-Suit into play early, as this allows Black Widow to defend against nearly every villain attack and take little damage, then ready almost immediately by triggering a preparation card.

I found myself going into alter-ego reasonably often, so I got more use out of Safe House #29 than I had anticipated.  Recursion in any card game is usually powerful and that’s definitely the case here.

Winter Soldier is a pretty boring card but you’ll end up being happy to draw him.  Most of the time you are going to be playing him for one or no resources.  Great signature ally!

Preparation cards are Black Widow’s bread-and-butter, but sometimes they’re not quite enough.  Covert Ops and Dance of Death will be your big impact cards to cover the gaps.  Being able to use a card like Covert Ops in alter-ego is a bonus as well.

Special mention should go to Spycraft.  This card gives you an immense amount of control.  While it doesn’t outright stop a card, it can at least give you a chance to draw something less crippling.  Great card!

At the moment, Justice is still my least-favourite aspect.  Even after all these games with Black Widow, I’m not certain which aspect is best for her!  Leadership is probably the best aspect in the game right now and you can pretty much slot any hero in with it and do okay.  Rapid Response seems like a great preparation card, so maybe Black Widow Leadership is the best, I don’t know!

Either way, I’m going to give Black Widow a rest for a bit.  This article makes three Deck Development ones in a row, so I’m going to make a change for my next one.  Anyway, I hope that you’ve enjoyed my ramblings.  That’s all for now!