I’m lucky enough to have the Doctor Strange pack already and since I’ve currently got a lot of spare time, I’ve also had plenty of opportunity to play some games.  In this article I am going to go through my deck development so far for Doctor Strange Leadership.

Some players like to tailor their deck for each villain, but I prefer to make a deck then run the gauntlet of scenarios without doing so (though I will make changes during a deck’s development if I think certain cards aren’t working).  I think that when playing on heroic difficulty you will have to tailor your deck though.

When I start building any new Marvel Champions deck I start with the following nine cards:

As I play more games with a deck I might take some of these out, but they’re a good starting point.  Below is the initial decklist that I went with.  It’s primarily designed for solo play, but seems to do fine in higher player counts as well. 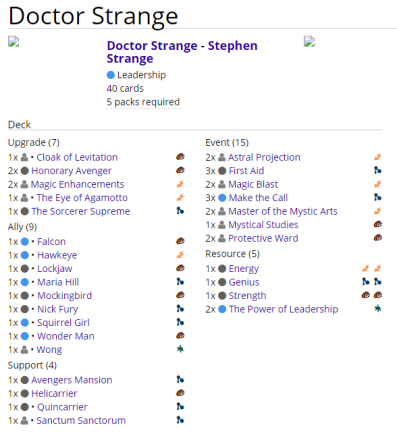 After playing six solo games with this Doctor Strange deck I can say that he felt very powerful.  I was always looking to play as many Invocations as I could, making cards like Cloak of Levitation and Master of the Mystic Arts invaluable.  Playing Leadership meant that I had plenty of targets for Seven Rings of Raggadorr.

Cards that stood out during the gauntlet were Hawkeye (for Ultron and Mutagen Formula, no real surprises there), Wong for his ability to heal Doctor Strange (thus reducing the amount of time you need to spend in alter-ego) as well as cycle the Invocation deck, and Cloak of Levitation.  The Cloak might just be his most-needed card, and to say that I was annoyed when one of Klaw’s encounter cards discarded it from my hand before I could play it was an understatement (it’s also probably why that game took so long to win!).

Pretty much all of Doctor Strange’s cards were great, but the cards that had the least impact for me were Sanctum Sanctorum and Magical Enhancements.  Thanks to First Aid and Wong I was very rarely in alter-ego, so while Sanctum Sanctorum‘s ability is good, I almost never got the chance to use it.  Magical Enhancements seems like a card that would be better in multiplayer on another hero, as Doctor Strange would probably rather be casting Invocations than lowering himself to perform basic actions.

So what would I change?  Honorary Avenger was a waste of time (I’m still not really sure why I put it in the deck) and is out.  The Triskelion is definitely needed, particularly as Wong is likely to stay in play for the rest of the game after you play him (only sacrifice him in great need!), so effectively reduces your ally slots to two.

Finally, I’m adding Vision to the deck.  Some people love Vision because of all the Magical Christmas Land combos that you can pull off with him, but I’m not convinced.  However, in this deck there are two repeatable ways of paying for his ability; The Eye of Agamotto and Quincarrier.  With these I think he is actually worth playing, so much so that keeping him in play a bit longer via First Aid is probably also worth it in this deck.

So here’s my current build for Doctor Strange Leadership:

As with nearly every scenario in Marvel Champions, you’ll be desperately putting out fires early on while trying to build your board state.  Cloak of Levitation and Wong are the two cards that I would prioritise getting into play as quickly as you can.  Use your allies (other than Wong!) as cannon fodder while you hurl your Invocations around.  Between Wong’s heal, First Aid, Seven Rings of Raggadorr, and lots of expendable allies, you’ll almost never need to go back to alter-ego.

I think that I am going to remove Risky Business and Wrecking Crew from The Gauntlet.  In my opinion, they are both fairly unsatisfying scenarios, which is a shame because they have been the most adventurous in terms of design.  I think that I’m also going to increase the number of times I face each scenario to three, rather than just one as this will give things a chance to even out.

I hope you have enjoyed this article.  I plan to write more Marvel Champions content, so please let me know what you thought to this format.