With all of the recent Legacies spoilers to review, this tournament report is somewhat overdue.  For this event, I decided to go with a character combination that I used back at our Store Championship, Phasma & Friends! 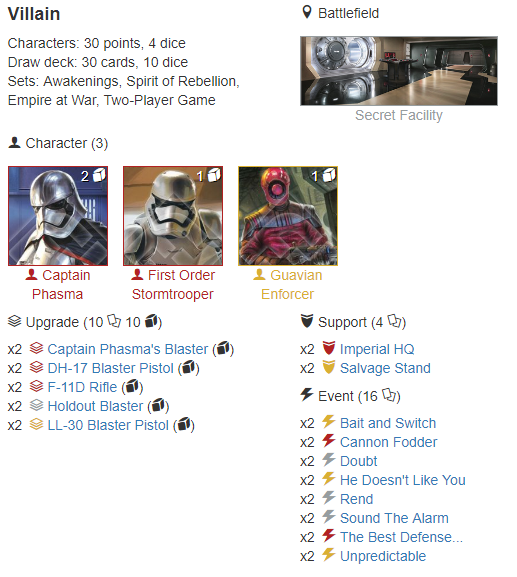 I haven’t used this deck since before Empire at War was released, so it’s got a few extra goodies since then.

Captain Phasma’s Blaster is a fantastic update to the deck, and LL-30 Blaster Pistol is another useful redeploy weapon.

Imperial HQ is one of the best cards in Empire at War, and definitely helps you keep on resolving damage.

Rend and Sound The Alarm are the other new cards to the deck.  Sound The Alarm is a good emergency button, and Rend is a good defence against Salvage Stand (which hurts this deck more than I’d like), and also screws over Sith Holocrons and Force Speeds.

Round One vs Rachael (e7thSister/Royal/Storm)

With Seventh Sister effectively starting with three dice (if you include the ID9 Seeker Droid), I decided to target her first.  With the amount of removal that blue/red villains have access to, Seventh Sister just kept hanging on.  Meanwhile, my team was diminishing too quickly.  The game came down to Phasma vs Seventh Sister, but thanks to cards like Lightsaber Throw, I lost the damage race.  LOSS

Round Two vs Karl (eHux/Nightsister/Guavian)

In this game I came out guns blazing and managed to take Hux down early on in the second round.  Upgrades like Captain Phasma’s Blaster really helped ramp the damage up, and the Stormtrooper and Guavian were dispatched in short order.  WIN

Round Three vs Jack (ePalpatine)

It’s going to sound weird, but when using my particular team I prefer it when Palpatine rolls out damage with his character dice, as it means that I can guardian them away. What actually ended up happening was that my opponent rolled lots of resources and shields.  During this game, my opponent managed to use Rise Again twice.  On the final round when both of our characters were on a low amount of health, the deciding factor was a well-timed Feel Your Anger by my opponent which removed some crucial dice. LOSS

Round Four vs Loki (eSnap/Wookie/Wookie)

This was another game where I came out guns blazing, and I killed that annoying git Snap very early on.  Bait and Switch was a key card in this game; I drew both copies and it allowed me to dish out some frankly disgusting amounts of damage.  WIN

So I finished firmly in the middle of the pack this time, only managing two wins.  However, I do think the team still has potential, it just didn’t quite work out on the day.  For anyone looking to build a decent team on a budget, this one isn’t too bad, as the only legendary needed was Phasma herself.

Palpatine won it in the end!  He’s still capable of dealing massive amounts of damage in a short amount of time if you’re not careful.  However, he’ll face his greatest challenge yet once Legacies is released, as indirect damage is likely to be pretty harsh against him.

We’ve got one more local tournament this year, which may well be the last one before Legacies is tournament-legal (even though us lucky people in the UK are able to purchase Legacies boosters and starters tomorrow, it won’t be legal until the set is released worldwide).  I’m quite tempted to run another old character pairing, perhaps Vader/Kylo or Han/Snap.