It’s time for another tournament report, and this time both of us were able to attend!

Tim: I decided to go with my Hera vehicles deck that I used at our last tournament, but I’ve made a few changes since then.  I really wanted to try out Black One, as I think that the special ability has potential to squeeze a bit more damage out.

Speaking of specials, it was probably about time that I put C-3PO into my deck, since he’s probably the best card that heroes have at the moment.  He also works great with U-Wing and Y-Wing (my best two vehicles), so it seemed like a natural fit.

I’ve become increasingly disillusioned with Ghost, and the Millenium Falcon just doesn’t match up well when compared against U-Wing for the same cost; these were swapped out for Black One.  Also getting cut was Quadjumper.  I think to guarantee that I get value from Quadjumper I’d have to play more vehicles than I was.  I guess I just prefer Rally Aid for economy. 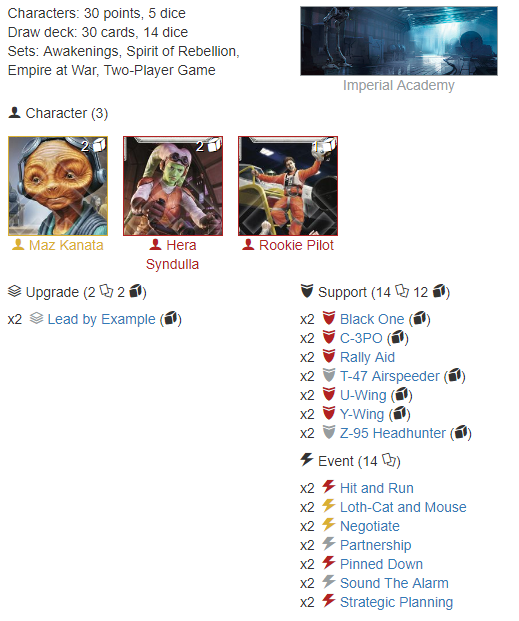 Jaydee: Right, back to my good ol’ Rey Poe starter style deck. I love this deck so I decided to play around with it once again. So I’m changing a few slower cards and going to try and have Poe do a little more work.

Planetary Uprising is one of my faves to use so it’s going in there, I’m also adding A280 Blaster Rifle and replacing one of Poe’s blasters. Adding a copy each of One With the Force and Rey’s Lightsaber. On the note of making Poe work, adding a couple of good ol’ fashion Rocket Launchers. Simple fun. 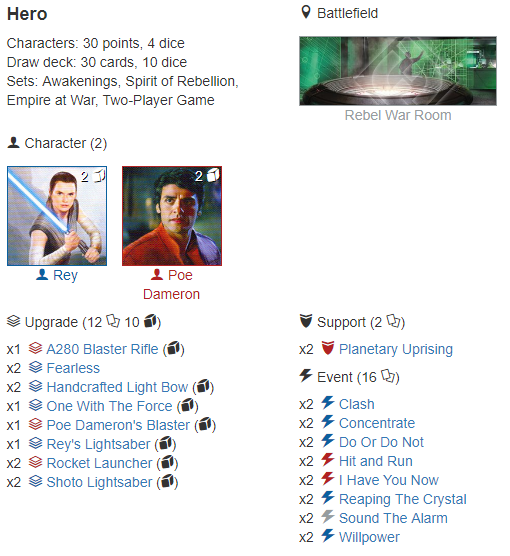 Wow, blue/red villains have a lot of really good control cards, and in this game I got to feel their power.  Between Deflect, The Best Defense, and Isolation, my dice were controlled quite well.  As a result, it took me too long to kill Vader, by which time it was just a Rookie Pilot versus a MagnaGuard.  On the final round, the MagnaGuard rolled out and one-shotted the rookie.  LOSS

Playing against a slightly altered starter deck was fun as it’s a good deck for a friendly-driven tournament. I lost the opening roll so went second giving me the option to get shields on both Rey and Poe, giving me the advantage to get a point of damage on his Rey when I activated mine. I managed to avoid damage by a using Clash and then hit Rey for 6 damage.

On round 2 I played a Rocket Launcher which helped demolish Rey, but not before she landed 3 damage on my Rey. After 4 damage from launcher on my first roll of it, his Rey handed her lightsaber over to Poe who made good use of it, and managed to roll 6 damage before my Ewoks joined the fray with Sound the Alarm. Rocket launcher did its job on my next turn and finished off Poe with another 4 damage. WIN

Kylo/FN, but not the one you were expecting.  My opponent managed to get a couple of Z6 Riot Control Batons out quite quickly onto FN-2199, as well as a F-11D Rifle on the round that I killed him.  These all redeployed over to Kylo Ren, but he was facing down a lot of vehicles at that point (including a Y-Wing whose special ability is particularly brutal when your opponent only has one character), who took him out in short order.  WIN

Didn’t go well with at all; my rolling was in a nightmare zone and trickery was afoot as the great duo of Phasma and Jango nuked Rey down asap, and then went to town on Poe. Nothing special in this match, just straight out beautiful aggro from my opponent. Sadly my deck got a horrible case of aggro block and couldn’t come back from it in time.  LOSS

My opponent used Lightsaber Pull to grab a Shoto Lightsaber on the first round.  Knowing how deadly Qui-Gon Jinn can be once he starts getting upgrades like that, I decided to aggressively reroll for more damage.  Hera was killed halfway through the second round, but I’d got a Black One into play through her ability.  With a couple of rerolls, I managed to burn down Qui-Gon.  That left Rey against Maz and Rookie Pilot, along with several vehicles.  It didn’t go well for Rey.  WIN

OMG I can’t stress enough how much I hate mill decks; soulless, mind-numbing mill decks. This game lasted till the very last card I had. I took no damage and opponent had so many shields at one stage I was sure I was gonna never get through. Finally, Rocket Launcher did some nice work with a 4 damage side hitting twice. Rieekan went down first and then the Jedi Instructor. The last round I had a little luck with his bad dice roll giving him nothing to do after he had just hit Hyperspace Jump on my previous glory roll. I decided to place down a second Planetary Uprising which killed off Amidala.  WIN

This was a fast and aggressive game.  I managed to get some juicy vehicles into play with Hera’s special, and combined with a couple of Strategic Planning, was able to burn down Jango quite quickly.  That left Phasma, who was already on low health thanks to using The Best Defense and taking the brunt of a Y-Wing special.  I finished the game with only Rookie Pilot left alive, albeit with only three health remaining.  WIN

I knew this deck would obliterate me from the get-go so I wasn’t to happy about playing it, but hey it’s all fun.  Except it wasn’t, not even a bit. Vader hits so hard its just ridiculous. I’m surprise he doesn’t see much more play, seems like a lot of fun. The MagnaGuard spent all match on the sidelines quiet and peaceful, while Vader hit Rey first turn for 8 damage before finishing her off next turn like swatting a fly. Poe even with a Rocket Launcher and his blaster was no match for Vader with 2 Force Speed. This game ended exactly like I expected it to end, my team splatted all over the table with Vader standing tall as it should be.  LOSS

It was a pretty quiet tournament this week, but it was still a good event.  In this one, heroes outnumbered the villains 5-4.

So I had to play against my fourth round opponent straight away!  Another fast and high-damage game, but no Strategic Planning this time.  Instead, some solid damage rolls from two T-47 Airspeeders and a Y-Wing helped me burn down his characters.  WIN

Having used a version of the Rieekan mill deck before, I felt fairly confident that I knew how to play against it.  I managed to win the battlefield roll, and decided to go with my opponent’s battlefield, War-Torn Streets, as I didn’t want to give my opponent the shields to start with.

The first round was very cagey from both of us; I was only milled for two, and I didn’t manage to inflict any damage beyond removing shields.  Things soon ramped up, as on round two I did five damage to General Rieekan, then blasted him away the following round.  My deck was taking a good hit, but I’d got a U-Wing into play (permanently), whose special and three damage sides were taking a toll.

The vehicles I had in play were putting out a lot of damage by the fifth round.  I finished the game with no cards in my deck and only one card in hand.  WIN

Tim: I really didn’t miss Ghost/Falcon/Quadjumper from my deck today.  Black One did a solid job as a replacement.  The times that I rolled a special with it felt pretty good, especially if I hadn’t already used C-3PO’s ability that turn (so I could use another special on Black One).

U-Wing and Y-Wing are always excellent, but the workhorses of the deck are the T-47 Airspeeder and Z-95 Headhunter, both of which put out consistent damage.  Don’t underestimate them, basically!

I’ve played a lot of games with this team now, and I’m beginning to dislike Loth-Cat and Mouse, and Negotiate.  Loth-Cat is particularly annoying to use, as it will frequently allow my opponent to remove one of my premium vehicle dice (I miss He Doesn’t Like You so much!).  I think that I’m going to try Rebel Assault as a replacement for it, even though it’s not a particularly great mitigation card.  I can’t wait to get Crash Landing from Legacies.

I’m probably also going to try and find a way to squeeze Tech Team into my deck, as well as change my battlefield to Weapons Factory Alpha, as it’d be nice on those occasions where I win the battlefield roll, to be able pay for a Y-Wing straight away on round one.

Jaydee: I enjoy using these two a lot, I know they are starter pack characters, but they have such good synergies with sets that you can’t help but experiment with them. I know where I went wrong with this incarnation of the deck with not having two Rey’s Lightsabers and Poe’s Blaster in order to get to them faster.

Planetary Uprising was a great addition since I last used this deck and I think Hit and Run will never leave this deck. Think Threepio might be a good addition to it though.

All in all I put this deck together pretty fast and also with just fun in mind. Still thinking of ways to use K-2SO and Ahsoka as best as possible for next time.