FFG’s latest Destiny article was a very exciting preview of the next set, Legacies.  In addition to announcing the next booster set and two new starter decks, they also showcase a new dice symbol, a new game term, and a new type of card.  Let’s dive in!

This is going to be damage that your opponent can distribute as they wish, just like how Palpatine’s ability works, or the special of F-11D Rifle.

This is a very straightforward ability, and is going to make cards like Bossk and Relentless Pursuit a lot more useful.

Resistance Bomber has lots of indirect damage on it for three resources; could you imagine having a three-cost support card that had 3/3/6 ranged damage on it?  I think this is going to be how they make indirect damage balanced and competitive, by making the values higher than ranged or melee for the same cost.

This card also has an ability where you put damage on the card every time you resolve its die.  This isn’t the first time we’ve put damage on support cards (Backup Muscle), but using the damage as a kind of timer on how long you can keep it in play is a new concept.

Bubble Shield continues with the damage on supports theme.  It can absorb up to three indirect damage, yours or your opponent’s.  If indirect damage becomes a big thing, Bubble Shield may see some play, but my initial instinct is that this won’t be very useful.

This one is very simple; a Power Action is an ability that can only be used once per round.

Wedge Antilles has a very straightforward but strong ability.  Turning one of your vehicle dice to any side can be crazy-powerful.  Also, Wedge’s ability doesn’t require that he remove any of his own dice, unlike General Veers.

I like the idea of power actions.  I hope that this preview article is the springboard for an errata to FN-2199’s ability.  Something like:

“Power Action – Play a weapon from your hand on this character (paying its cost).  Roll that weapon die, if able.  You may immediately resolve it.”

These are something that have been speculated about since Palpatine was spoiled and people said “Why isn’t he thirty points?”.  Well, now we know! 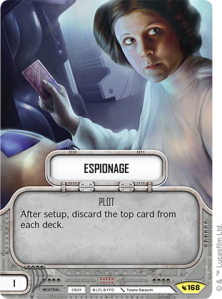 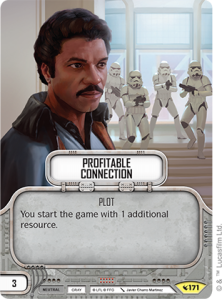 Sometimes you are going to have a few character points remaining.  Plot cards allow you to spend those spare points on a minor advantage.

This is another simple but interesting addition to Destiny.  Obviously, we only have these two plots previewed so far, but Profitable Connection seems very good (it does cost three points!) and Espionage seems a bit crappy.  I’d be very interested to see the other one-point plots, as I frequently end up with a spare point in my builds.

As a reader of Marvel’s Star Wars comics, I was quite happy to see Doctor Aphra introduced to Destiny.  This should open the door to other characters, such as Black Krrsantan.

Doctor Aphra is sporting the new dice face, indirect damage, and her second ability directly references it.  Whenever you deal indirect damage to yourself (note; through one of your card effects, not when your opponent forces you to take indirect damage), you may draw a card.

She is clearly designed to work with the card below, BT-1, which is even more apparent because her first ability decreases the cost of the first droid you play each round (we will probably see 0-0-0 in this set as well), but can also work with cards like ID9 Seeker Droid.

I think for her points cost she is going to be a good secondary character.  Her abilities skew her towards a droid-heavy deck, with lots of shenanigans around dealing yourself indirect damage for bonuses.  I also really want to make a deck with Flanking Maneuver in it, and she’s probably going to make that happen.

Everyone’s favourite murderbot, BT-1!  For two resources it can deal a lot of damage.  The activation ability to deal both players an indirect damage is clearly intended to work with Doctor Aphra, but will probably work with several other effects in Legacies.

I like this card a lot (not just because of the character).  I can see yellow villain decks throwing in a copy of this even if they’re not playing Aphra or a support-themed deck.

Here’s the first of the indirect damage shenanigans.  This can be great if you have something like AT-ST or LR1K Sonic Cannon in hand.

Obi-Wan!  With two, three-damage sides, he’s a heavy-hitter.  With twelve health and two shield dice faces, he’s also going to be hard to kill.  Added to that, when you activate him you may give a character one shield.

He certainly isn’t the most exciting character card printed, but when paired with the next card, he’s going to be very powerful. 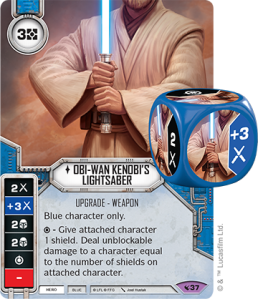 Most people’s first reaction to this card will be, “Wow, that’ll be good for Qui-Gon Jinn!”, and yep, it’s going to be brutal.

I think that this is going to be an extremely sought-after card in Legacies, most likely being the most wanted hero legendary in the set.

Now that we have ways to search for lightsabers (Lightsaber Pull), and ways to pay less for them (Reaping the Crystal & It Binds All Things), I would be surprised if this wasn’t in every blue hero deck once Legacies hits.

This version of Luke Skywalker is going to see a lot of play.  He is very fairly costed, has three damage sides, and a very nice ability.  In fact, I’d be tempted to say that his ability is amazing.

At fourteen points for the elite version, I wouldn’t be surprised to see Luke getting played as much as the new Captain Phasma currently is.

A version of Han Solo that can be played at elite with elite Chewbacca!  Fans of Han and Chewie (aka, most people) will be very happy about that.

At fourteen points for the elite version, he’s not bad for his cost.  His ability is like a better version of Jabba the Hutt’s, since you can use it on any dice, not just yellow ones.  I think that he will see a lot of play.

Boba Fett!  Love him or hate him, it was about time that they introduced him to Destiny.

Intitial reaction from a lot of people has been disappointment, but I think he’s pretty good.  His special ability is great against dice with big numbers, such as Mace Windu’s four damage side, nearly any side on LR1K Sonic Cannon, or even Hound’s Tooth.  Most of the time it’s going to be at least two damage, but it’s a side that cannot be taken away with guardian.

Veteran Stormtrooper, isn’t that an oxymoron?  Also, does anyone else think that artwork looks one of the upcoming Legion models painted with a gloss varnish?

Okay, I’ve just given this card some grief, but I actually think it’s really good.  Two blanks is nothing new for Stormtroopers, and neither are three damage sides.  However, instead of having two ranged damage for the cost of one resource, this one has three indirect damage.

I think this character is great for nine points, and will definitely see a lot of play (partner with Darth Vader perhaps?).

This was a great preview from FFG, and has got me very enthusiastic about the direction that Destiny is going.

We’re still not sure on a release date for Legacies, but it’ll most likely be January 2018 (four months after the release of Empire At War).